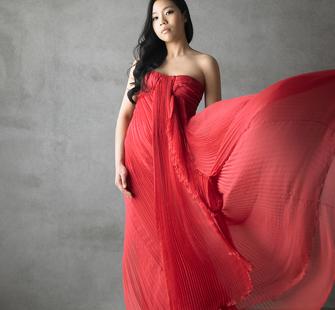 "Mr. Maazel led a taut performance (of Bernstein‘s Age of Anxiety), and the orchestra played this dark-hued music vividly and with a sharp edge. But the standout was Joyce Yang, who gave a knockout performance of the alternately poetic, fiery and occasionally jazz-tinged piano line." --Allan Kozinn, The New York Times

"In between these works, de Waart conducted Beethoven‘s Piano Concerto No. 3, with Joyce Yang, Silver Medalist of the 12th Van Cliburn International Competition, as the soloist ... She played with a polished, pearly evenness that was remarkable for its ease up and down the keyboard." --Charles Pasles, Los Angeles Times


Critically acclaimed as “the most gifted young pianist of her generation” with a “million-volt stage presence,” pianist Joyce Yang captivates audiences around the globe with her stunning virtuosity combined with heartfelt lyricism and interpretive sensitivity. Just twenty-four, she has established herself as one of the leading artists of her generation through her innovative solo recitals and notable collaborations with the world’s top orchestras. In 2010 she was awarded an Avery Fisher Career Grant, one of the most prestigious prizes in classical music.

In June 2005, Ms. Yang came to international attention when she became the Silver Medalist of the 12th Van Cliburn International Competition.  As the youngest contestant, Ms. Yang swept two additional awards as an all-around winner, receiving the Steven De Groote Memorial Award for Best Performance of Chamber Music with the Takàcs Quartet, and the Beverley Taylor Smith Award for Best Performance of a New Work.

Since her spectacular finish, Ms. Yang has flourished into an “astonishing artist” (Neue Zürcher Zeitung), giving ground breaking debuts all across the world.  In just a few short years, Ms. Yang has become a household name in various high-profile venues, such as Lincoln Center and the Kennedy Center. In November of 2006, Ms. Yang made her celebrated New York Philharmonic debut with Lorin Maazel at Avery Fisher Hall and performed on their Asian tour, making a triumphant return to her hometown in South Korea.  Since then, she has appeared with them frequently, including the opening night of the Leonard Bernstein Festival in September 2008 at the special request of Lorin Maazel in his final season as Music Director. The New York Times called Yang’s rendition of Bernstein’s “Age of Anxiety” a “knock-out.”

In the summer of 2010, Ms. Yang made her San Francisco Symphony debut with Alondra de la Parra, returned to the Chicago Symphony under James Conlon at Ravinia, and she performed a recital at the Crested Butte Music Festival and chamber music at La Jolla Summerfest.  Other highlights of the 2010-2011 season included concerto performances with Edo de Waart in Milwaukee, Sydney, Melbourne, Malaysia, Hong Kong and Taiwan, as well as appearances as orchestral soloist in Tel Aviv, Connecticut, Hawaii, Illinois, Nebraska, North Carolina and Utah.  In addition, she performs recitals in Atlanta, Berkeley (Cal Performances) and Sydney, Australia, and making her first appearance at the Santa Fe Chamber Music Festival.  An avid chamber musician, she continues her longtime collaboration with the Takàcs Quartet, and tours with violinist Stefan Jackiw and the Miró Quartet.

In the 2009-2010 season Ms. Yang performed with the Los Angeles Philharmonic at the Hollywood Bowl and Walt Disney Hall, the Vancouver Symphony Orchestra, The Hague Symphony Orchestra in The Netherlands, the Lexington and Naples Philharmonics, and the Sarasota, Milwaukee, New Mexico, Syracuse, Signature, Tucson, Duluth-Superior, Elgin and Louisville Symphonies. In addition, Ms. Yang debuted in Budapest, Hungary, playing in the historic Béla Bartók Concert Hall with the Danubia Symphony.  Her recital for the Frederic Chopin Society in Minneapolis has been featured on American Public Media’s nationally syndicated radio program “Performance Today,” where she is a frequent guest.

Born in Seoul, Korea, Ms. Yang received her first piano lesson at age four from her aunt. She quickly took to the instrument, which she received as a birthday present. Over the next few years, she won several national piano competitions in Korea. By age ten, she had entered the School of Music at the Korea National University of Arts, and subsequently made a number of concerto and recital appearances in Seoul and Daejon. In 1997, Ms. Yang moved to the United States to begin studies at the Pre-College division of the Juilliard School in New York with Dr. Yoheved Kaplinsky. During her first year at Juilliard, she won its Pre-College Division Concerto Competition, resulting in a performance of the Haydn Concerto in D major with the Juilliard Pre-College Chamber Orchestra.

In April 1999, Ms. Yang was invited to perform at a benefit concert with the Juilliard Orchestra, conducted by Leonard Slatkin. Winning the Philadelphia Orchestra's Greenfield Competition led to a performance of the Prokofiev Piano Concerto No. 3 with the Philadelphia Orchestra when she was just twelve.  She recently graduated from Juilliard with special honor, as the recipient of the 2010 Arthur Rubinstein Prize.

Joyce Yang is featured in In the Heart of Music, the documentary about the 2005 Van Cliburn International Piano Competition. Her debut disc, distributed by harmonia mundi usa, includes live performances of works by Bach, Liszt, Scarlatti, and the Australian composer Carl Vine.  A Steinway Artist since 2008, she currently resides in New York City.