How much of sight is invention? 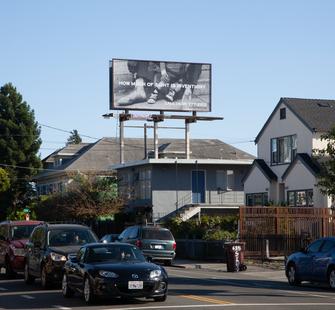 Join lone some participant Chloë Bass in conversation with photographer, Jules Allen as they discuss the power of image construction for public presentation and the secrets they hold.

Featured on 25 independent public sites around the Bay Area, including Montalvo’s public park and the entry foyer of the San Jose Museum of Quilts & Textiles, lone some includes works by six artists responding to social isolation and loneliness in the ever-changing landscape of our urban areas, in this significant moment of COVID-19, shelter-in-place, and civic unrest. For more information, visit: montalvoarts.org/lonesome.

chloebass.com
Chloë Bass is a multiform conceptual artist working in performance, situation, conversation, publication, and installation. Bass has held numerous fellowships and residencies, most recently as a 2020-2022 Lucas Artists Fellow at Montalvo and 2019 Arts Matters Grantee. Her projects have appeared nationally and internationally, including recent exhibits at The Studio Museum in Harlem, New York; Kunsthalle Wilhelmshave in Wilhelmshaven, Germany; BAK basis voor actuele kunst in Utrecht, Netherlands; and The Southeastern Center for Contemporary Art in Winston-Salem, North Carolina; among many others. Bass’ short-form writing has been published on Hyperallergic, Arts Black, and Walker Reader. Her monograph was published by The Operating System in 2018 and she also has a chapbook, #sky #nofilter, forthcoming from DoubleCross Press. Bass is an Assistant Professor of Arts at Queens College, City University New York, where she co-runs Social Practice Queens with Gregory Sholette.

julesallen.photography
Jules Allen is an award-winning photographer, currently on the faculty of the City University of New York, is a professor in the department of Art and Design at Queensborough College. Allen’s photographs are reality-based images as well as metaphorical documents of which the primary foundation is grounded in behavior, enlightenment and irony. Allen’s work expresses the essential truth, that a cultures power is clearest when presented on its own terms. He shares the belief of photographer Diane Arbus, who states: “the more specific a thing is, the more general.” The artists, Danny Dawson, says wryly that Mr. Allen has a “keen eye for the obvious,” his lifelong work is evocative of the contemporary black experience. The images place subjects, drawn from the richness of black life, within universal paradigms. His aesthetic vision is rooted in music, gesture and ritual which renders American culture both locally and abroad. His photographs are in museum collections worldwide, including the Museum of Modern Art, the Brooklyn Museum, the Smithsonian, and The National Gallery. Allen has been widely exhibited in the U.S. and abroad, is the recipient of numerous awards and grants, and his extensive commercial and corporate work has been seen on the covers of numerous periodicals, magazines, journals, albums and CDs.