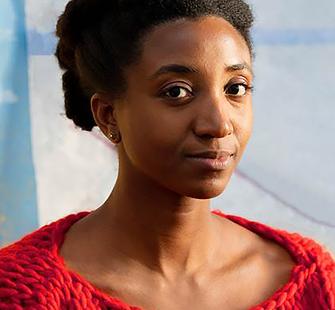 Join artist, musician, and writer Lex Brown and performance artist, comedian, and writer Kristina Wong for a wide-ranging conversation on dismantling internalized and external racism and sexism through art and humor. We’ll discuss how Brown and Wong draw on personal experiences to explore large-scale systems of power and create performance experiences that blur the roles of artist and audience; as well as explore the value of articulating blueprints for imaginary futures.

Lex Brown is an artist, musician, and writer. A native Californian, raised amongst Virginia’s big box stores and server farms, Brown’s work is informed by the omnipresence of data, information, media, and how its images condition our bodies and words. Brown builds new characters, expansive fictional worlds, and unexpected linguistic relationships in order to dismantle internalized racism and sexism within the mind of herself and audience.  Fluctuating between humor and seriousness, the work opens up a space for spirited examination, often drawing on family history and current, and historical events.  Her work plays with the scale of personal and emotional experience in relation to large scale systems of social and economic organization. Brown has performed and exhibited work at the New Museum, the High Line, the International Center of Photography, Recess, and The Kitchen in New York; REDCAT Theater and The Hammer Museum in Los Angeles; The Baltimore Museum of Art in Baltimore; and at the Munch Museum in Oslo, Norway. Brown holds degrees from Yale University (MFA) and Princeton University (AB). Consciousness, a survey of Brown's work spanning the past 8 years, is newly available from GenderFail. Her first paperback work in fiction, My Wet Hot Drone Summer, a sci-fi erotic novella that takes on surveillance and social justice, is available online. Brown teaches at Harvard University as a College Fellow in Theater Dance & Media and Art, Film & Visual Studies; and at Princeton University as a Lecturer in Visual Arts.

Kristina Wong is a performance artist, comedian, writer and elected representative who has been presented internationally across North America, the UK, Hong Kong and Africa.  She was featured in the New York Times’ Off Color series “highlighting artists of color who use humor to make smart social statements about the sometimes subtle, sometimes obvious ways that race plays out in America today.” She’s been a guest on late night shows on Comedy Central and FX, and an actor on film and TV. She starred in her own pilot presentation with Lionsgate for truTV. Her commentaries have appeared on American Public Media’s Marketplace, PBS, VICE, Jezebel, Playgirl Magazine, Huffington Post and CNN. She’s been awarded artist residencies from the MacDowell Colony, New York Theater Workshop, the San Diego International Airport and Ojai Playwrights Festival. Her work has been awarded with grants from Creative Capital, The MAP Fund, Center for Cultural Innovation, National Performance Network, a COLA Master Artist Fellowship from the Los Angeles Department of Cultural Affairs, as well as eight Los Angeles Artist-in-Residence awards.  Center Theatre Group honored her as the 2019 Sherwood Award recipient for her exceptional contribution to the Los Angeles theatre landscape and her work as an innovative and adventurous artist. Among the numerous immersive theater experiences she’s helped create, Kristina wrote the script for the Mad Hatter Gin and Tea Party.  She’s created viral web series like How Not to Pick Up Asian Chicks and just launched the second season of the award winning Radical Cram School.  Her rap career in post-conflict Northern Uganda is the subject of her last solo theater show The Wong Street Journal which toured the US, Canada and Lagos, Nigeria (presented by the US Consulate).  Her long running show Wong Flew Over the Cuckoo’s Nest looked at the high rates of depression and suicide among Asian American women and is now a concert film.  Her newest performance project is “Kristina Wong for Public Office”– a simultaneous real life stint in Public Office and show.  In her most blurry performance piece yet, Kristina currently serves as the elected representative of Wilshire Center Koreatown Sub-district 5 Neighborhood Council.