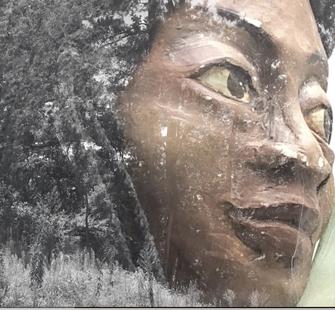 Moving image artist Lisa Crafts, composer and performer Matt Petty, and playwright Alva Rogers discuss collaborating on Weeping Mary. This experimental video includes music composed by Petty after meeting descendants of former slaves who established a "freedom colony" in Weeping Mary, Texas. Craft, Petty, and Rogers will talk about their current work and their decision to release Weeping Mary on Juneteenth to honor George Floyd and the anti-racism movement that followed his death.

Lisa Crafts is an animator and moving image artist whose interdisciplinary work addresses issues of environmental uncertainty, sexuality, creativity and chaos. She is currently working on a series of short moving image pieces about the horror, beauty, humor and loss of the Anthropocene. Blending animation, video, photography, drawing, painting and sculpture, the work inhabits the blur between what is seen and what is imagined. Crafts' work has screened in Europe, Asia, and throughout North America. She is a 2012 Guggenheim Fellow, and has received grants and fellowships from the Jerome Foundation, New York State Council for the Arts, New York Foundation for the Arts, and The MacDowell Colony. She teaches in the Film Video department at Pratt Institute in Brooklyn, New York.

Matt Petty is a trombonist, multi-instrumentalist, composer, performer, and video artist based in Memphis, Tennessee. Matt is known for creating music-based multimedia involving sound, video and live performance. He is the founder of the electro-acoustic collective Kisatchie Sound; an ensemble based in rural northern Louisiana that creates new music with a sense of place, rooted in the soil of the South. He is also trombonist and songwriter of the digital music collective You Can Call Me SIR with electronic musician Cristy Michel, whose upcoming EP invokes a dark rage embedded within modern queer identity. Inspired by history, folklore, pop-culture, and the natural world, Matt’s music has been described as “…An emotional and arresting juxtaposition of beautiful things” by composer and collaborator Eve Beglarian, which often includes reflections of his travels as a social explorer of the American landscape. As a collaborative artist, Matt’s work has been featured internationally at shows including Biome Arts’ ALT/FUTURE Environmental Art Series in Taipei, Taiwan, the Bad Video Art Show in Moscow, Russia, and the Ecos Urbanos electroacoustic music festival in Mexico City. Additionally, Matt is the co-creator of the feature documentary, Sacred as Folk about the life of Louisiana artist, Brother Michael David Elvestrom; and LIGHTEN UP, a multimedia fantasia about American “outsider” artists. Matt’s latest project NoMansLand is a visual concept album written in collaboration with musicians from the United States, Honduras, and Mexico. Petty was a 2016-18 Lucas Composer Fellow at Montalvo Arts Center.

Alva Rogers is a playwright, lyricist and educator whose writing utilizes magic realism to explore themes of American identity. She is a co-founder of the performance collective/theater troupe Rodeo Caldonia. Her work with Rodeo Caldonia was included in the 2017 Brooklyn Museum exhibition, We Wanted a Revolution: Black Radical Women, 1965–1985 curated by Rujeko Hockley and Catherine Morris. Her works for the stage include scooping the darkness empty, the doll plays, the life before reconstruction/ reconstructing whiteness and the musicals Night Bathing and Sunday and the Mermaid. Roger’s radio plays Aunt Aida's Hand and Stained were produced for National Public Radio and she is featured in the films Daughters of the Dust (1991) and School Daze (1986). Her use of dolls and puppets reveals her interest in the uses of enchantment and highlights the need to return to that childlike state of dwelling harmoniously in both reality and imagination. Roger’s new play-in-progress, Roman and Julie examines the historical and cultural dynamics in an interracial relationship, through time and across lifetimes. Rogers is the recipient of grants from the Rockefeller Foundation, Jim Henson Foundation, New York Foundation for the Arts, National Endowment for the Arts, Meet the Composer and a New York Dance and Performance Bessie Award, among others. Her work has been commissioned by The Joseph Papp Public Theater, Dixon Place, Heather Henson’s Handmade Puppet Films, The Kitchen, and the Spoleto Festival. During the time of COVID-19, Rogers launched an educational YouTube Channel, Miss Rogers’ Wonderful School to support families while homeschooing their children. Miss Rogers’s Wonderful School currently live-streams on Fridays @10:30am EST and recordings are posted on her channel missrogerswonderfulschool.com. Rogers was an artist in residence at the Lucas Artists Program in 2017, 2018 and 2019.