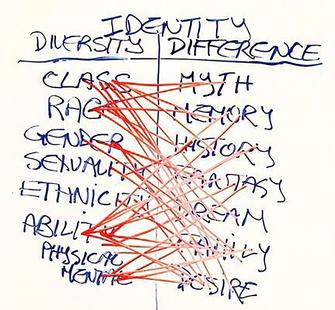 Artist, educator, and mediator, Dorit Cypis; artist and scholar Janet Owen Driggs; and artist and justice reform advocate Gregory Sale join us for a conversation reflecting on whiteness in this moment of racial reckoning. Cypis will share her immediate pivot in response to George Floyds murder, and her current work tackling racial injustice and the role of whiteness through PeoplesLab. Together we will discuss our experiences as we locate our roles in racial justice and anti-racism work as white folks.

Dorit Cypis has explored themes of history, identity and social relations as an artist, educator, mediator and social activator since the 1980s. Moving fluidly between the studio and the street, Cypis’ tools include performance, photography, immersive media installation presented in diverse art and cultural contexts nationally and internationally; mediation and dialogue facilitation; civic community programs building capacity for generative relations; publication on identity and social relations and curriculum development. Dorit is a founding member of Mediators Beyond Borders International, founded Kulture Klub Collaborative (a network of artists and home-less youth to bridge survival and inspiration), and was an early director of Foundation for Art Resources. She holds an MFA at the California Institute for the Arts and a Masters in Dispute Resolution at Pepperdine University. She was awarded a Guggenheim Fellowship and Rauschenberg Foundation Residency, 2014. Cypis was born in Israel and raised in Montreal, Canada. At the core of her work is a guiding question, “who are we to each other?”

Janet Owen Driggs is a writer, artist, curator and educator who has curated exhibitions and screening programs in the United Kingdom, United States, People's Republic of China and Mexico. Her essays have been published by KCET's Artbound, Artillery, ArtUS, Emergency Index, Puppet Monthly, and Art Review, and included in How Many Billboards? Art In Stead,Verlag F'Ur Moderne Kunst, 2010; Hammer Projects 1999-2009, Hammer Museum, 2009. Janet is the co-author ofPreserving a Home for Veterans (w. Lauren Bon, Richard Fox, Terence Lyons), Les Figues Press, Los Angeles, 2011; andSomething More Than Just Survival (w. Jules Rochelle), Probiscis, London, 2011. She is editor of Not A Cornfield: History/Site/Document published by the Annenberg Foundation in 2006. Janet’s artwork has been exhibited internationally, including in the United States, Europe, Scandinavia, and Brazil. She is currently the Associate Professor of Art History at Cypress College, CA, and Director of the Cypress College Art Gallery.