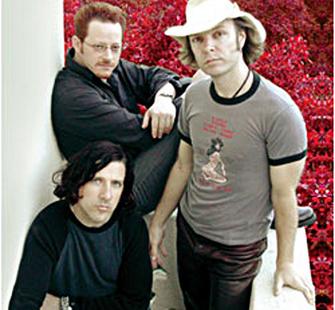 Summer Concerts produced in partnership with:

Scroll down for Dinner on the Veranda menu.
Call the Box Office to add dinner to your ticket purchase!

Soul Asylum are the quintessential little band that could; it only took ten years to turn them from a teenage garage band into multi-platinum-selling rock stars. Guitarist Dan Murphy, bassist Karl Mueller, and drummer Dave Pirner formed in 1981 as Loud Fast Rules in Minneapolis, MN. When the shambolic, no-longer-teenage band burst onto the scene in 1984, Soul Asylum had added Grant Young on drums and switched Pirner to rhythm guitar and vocals for the loud and fast Twin Tone album Say What You Will, Clarence...Karl Sold the Truck. However, the record was overshadowed by the current releases by fellow Twin Cities denizens the Replacements and Hüsker Dü; Soul Asylum have gone on record stating they were dubbed "the B-teamers" by the Replacements, which created bad feelings between the bands for years. Still, Soul Asylum forged their way on college radio and countless U.S. club tours, which gained them a devoted following. The "hell-on" rock band, in guitarist Murphy's words, released Made to Be Broken and the similar While You Were Out in 1986, but Pirner's songwriting always far outshone the form. The band signed to A&M Records in 1989 as part of a distribution pact between Twin Tone and A&M for the harder rocking Hang Time, produced by Lenny Kaye. The record garnered some college radio attention, but by 1990's And the Horse They Rode in On, Soul Asylum had fallen out of favor with the indie rock set and were left languishing in limbo, having almost entirely forsaken their post-punk indie roots.

Pirner and Murphy spent the time regrouping, working out songs as the acoustic duo Murphy & Pirfinkle, and touring the Midwest. The songs found their way to Columbia Records and onto Grave Dancers Union in 1992, which ultimately earned Soul Asylum a multi-platinum record after a slow start. The magical third single, "Runaway Train," propelled by a public service announcement-style video for missing children, helped push the single to number five and the album to number 11, and turned the band into a household name. They performed at the Clinton Inauguration in 1992. Shortly after the release of Grave Dancers, drummer Young left the band and was replaced by Sterling Campbell for the recording of Let Your Dim Light Shine in 1995. Though it charted at number six and a single, "Misery," hit the Top 20, Soul Asylum never reached the dizzying heights nor masses they touched with "Runaway Train."

Murphy also records and tours with the Minneapolis "supergroup" Golden Smog, while Pirner contributed vocals to their 1996 recording, On Golden Smog. Pirner's well-publicized romance with actress Winona Ryder beginning in 1994 left skeptics predicting that Soul Asylum would break up, but they returned in 1998 with Candy from a Stranger. Sadly, bassist and founding member Karl Mueller died of esophageal cancer on June 17, 2005, at the age of 41. The band reunited in 2006 for Silver Lining, their ninth full-length recording. ~ (Bio by Denise Sullivan, Rovi)

In 1992, dada exploded on the scene with their critically acclaimed debut release, Puzzle (#2 Billboard’s Heatseeker Chart) on Miles Copeland’s I.R.S. Records. The single “Dizz Knee Land”, (#5 on Billboard Modern Rock Tracks chart), set the alternative radio movement – just then hitting it’s stride – on fire, and quickly migrated to mainstream rock and pop stations. Mark Brown of The Rocky Mountain News recently wrote, dada “burst onto the national scene with the single ‘ Dizz Knee Land’ in 1992 and followed it up with a solid series of albums and a strong following…” The third single “Dim”, (#24 on Billboard Modern Rock Tracks chart), further solidified dada’s reputation as a band to watch. Puzzle sold more than a half million copies and made a number of critics “best of year” lists. Sixteen months of constant touring followed, both as headliners on the club circuit and as openers for Sting, Izzy Stradlin & the Ju Ju Hounds and Material Issue (USA), Crowded House (UK), and Depeche Mode (Portugal). In September 1994 dada released American Highway Flower (#5 Billboard’s Heatseeker Chart) — which had a harder feel, both musically and lyrically, than it’s predecessor, reflecting the band’s evolution from a studio to a touring band. The single, “All I Am,” spent 8 weeks on Billboard’s Modern Rock Tracks Chart. The exquisite El Subliminoso was perhaps the group’s most artistically complex and satisfying offering. The bands hails from right here in Saratoga, California, and is excited to be playing their first show at Montalvo Arts Center in their hometown.

Visit our Facebook Event Page for this concert and RSVP!

Dinner on the Veranda is available for $25 and served 90 minutes prior to the concert!

Advance dinner reservations can be made until 4pm the day before the concert. Some walk-ups may be available.

Summer Concerts produced in partnership with: