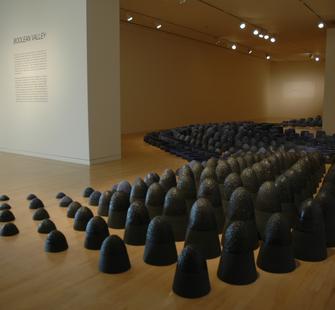 Adam Silverman and Nader Tehrani met while pursuing their Bachelor of Architecture degrees at Rhode Island School of Design. Silverman is now an artist and potter who opened his own studio, Atwater Pottery, in 2003 and exhibits in the U.S and Asia. Tehrani is co-principal architect of Boston-based Office dA, and is an Associate Professor of Architecture at MIT.

Boolean Valley (2008) is a room-sized installation comprised of 400 clay objects glazed in a striking compound of cobalt blue, black and silicon carbide. Together the pieces form a sloping sculptural landscape derived from the principle of "Boolean logic," which calibrates the geometry of intersecting objects. Cast from a single mold, each clay piece is intersected with a variable slice, cut in two and redistributed over the gallery floor to produce the topography of a landscape. Silverman and Tehrani's collaborative project premieres at the San José Museum of Art before being re-sited at Montalvo's Project Space, after which the artwork moves to Los Angeles for exhibition at The Museum of Contemporary Art's Pacific Design Center gallery.

Boolean Valley is the first exhibition as part of AGENCY: The Work of Artists, a new arts initiative curated by Julie Lazar and presented by Montalvo Arts Center.

In 2010, Boolean Valley was on display at the Nasher Sculpture Center in Dallas, Texas.