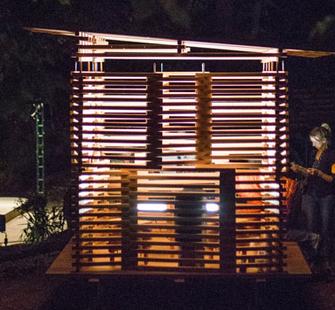 Montalvo Arts Center is pleased to announce the debut of its Lucas Artist Program's newest commission: Rolling Counterpoint, a project by artist Taro Hattori. The work, which draws on the tradition of the Japanese teahouse, is envisioned as a physical and virtual space for encounter and dialogue about belonging and division in contemporary society. Rolling Counterpoint will travel to three Bay Area cities in early 2017: Santa Clara County in February; San Francisco in March; and Berkeley in April. Working collaboratively with a large group of partners, Hattori will coordinate a series of public, semi-public, and invitation-only events organized around two key questions: What does it mean to belong? and What divides us? and will address such wide-ranging issues as social exclusion, immigration, re-segregation, homelessness, and income inequality.

Rolling Counterpoint was developed by the artist while he was in residence at Montalvo's Lucas Artists Residency Program in 2016. The project consists of two structures: a mobile teahouse built on a trailer and an identical stationary structure installed outdoors on Montalvo Arts Center’s 175-acre property. In both teahouses, the artist will share tea with guests and engage them in discussion about their experiences and their concerns, giving participants a platform to share their perspectives. Guests will include members of the public, representatives from local organizations, thought-leaders, community organizers, and more. These conversations will be recorded and/or live streamed on a website that will be launched in January 2017, to create an interactive archive.

Historically, the Japanese teahouse served as a space for contemplation and communion with others. According to Hattori, "in 16th-century Japan, against the backdrop of civil war, tea masters became political go-betweens while teahouses served as radically egalitarian spaces of nonviolence and provided opportunities for rational discourse, conviviality, political consensus and peace. Using this history as a point of departure, I am reimagining the teahouse as a generative space where guests can share stories and experiences, address conflict, foster understanding, and imagine new ways of being together."

"A fraught election cycle has brought questions about belonging to the forefront of the public imagination," said Montalvo curator Donna Conwell, who is working closely with Hattori to plan the events scheduled around the roving teahouse. "Questions like What does belonging mean in the US today? How can we move past divisiveness to find more peaceful and respectful ways of being together? What does it mean to create spaces of inclusion? and How do we promote a sense of cultural empathy? feel more urgent than ever. We hope to open a necessary dialogue around these issues."