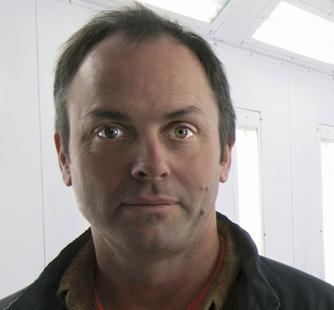 Charles Lindsay is a multi-disciplinary artist interested in the evolution of eco-systems, cultures and technology. He creates immersive environments, sound installations, sculptures built from salvaged aerospace and bio-tech equipment, photographs and videos. Merging semiotics and absurdity his work is informed by our species greatest existential challenges: climate change and the loss of bio-diversity, the prospect of self-aware AI, and humanity’s propensity to act against its own long term survival.

Lindsay has created several artworks from his research at NASA Ames, including sound experiments carried out in the world’s largest wind tunnel, video captured at the hyper-wall data visualization center, flow visualization from the fluid mechanics laboratories, and audio capture of the D-Wave2 quantum computer at NASA's Quantum Artificial Intelligence Laboratory (QuAIL.)

Educated as an exploration geologist Lindsay is the SETI Institute’s AIR Program Founder and Director, a Guggenheim Fellow, recipient of the Robert Rauschenberg Residency, Fellow at the Nevada Museum of Art’s Center for Art and Environment and the innovator behind OSA EARS - a project designed to deliver real time high resolution sound and data from one of Earth’s most bio-diverse rain forests to anyone anywhere with internet. OSA EARS, located on Costa Rica’s OSA peninsula, and its parallel sound installation ECOTONE, have been taken on for development by Bell Labs and ARUP.

Lindsay received a Guggenheim Fellowship (2010) for CARBON - a hybrid process conflating photography, drawing and the language of high resolution scientific imaging to render ambiguous the micro and the vast, the organic and the digital, the real and the alien. Recent installations include the FIELD STATION at MASS MoCA, the Des Moines Center for the Arts, and the Akron Museum of Art. His work has been featured by WIRED, CNN International and Motherboard. He is the author of 7 books of photographs. CARBON, including an essay by Dr. Jill Tarter, was published by Minor Matters Books (2016).

Lindsay is currently working extensively in China, collaborating with Chinese artist and VR film maker Shaoyu Su. Together they realized the ambitious Wind Tunnel installation at the Today Art Museum in Beijing, summer, 2017. The duo are currently working on The CLOUD - an inter-active sculpture scheduled to debut at the first Shenzhen Biennale in May 2018.