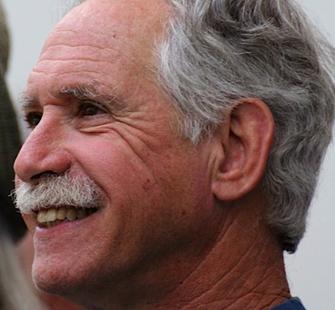 Jerry Falek began working with children more than 40 years ago, 35 of which have been as a teaching and performing artist. After a bachelor’s degree in biology from Carnegie-Mellon University, a master’s in special education from American University, and several years as a special education teacher, Falek leapt into the arts with both feet.

He found that the goals of special education were identical to the benefits of the arts: encouraging wholeness in students, helping them discover deep joy in a complicated world, and fostering communication skills, group skills, and focus. Thus, his training in special education coupled with his growing arts expertise resulted in Falek’s unique and multifaceted approach to education.

Since 1980, he has been a performing artist with major arts-education organizations throughout central California, though his work has taken him to such diverse places as Soledad Prison, rural Alaska, and Stanford Children’s Hospital. He appears regularly as a storyteller at universities, museums, and schools, where educators of older students call him ‘the middle school whisperer.’

In addition to having won award for his basketry and bread-baking, Falek makes a 50-mile trek every year with the Miwok and Paiute Indians of the Yosemite Valley and Mono Lake regions to commemorate their traditional trade route dating back 2,000 years.