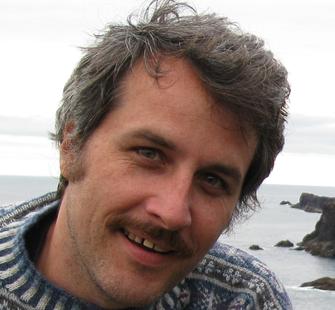 “Jim Finn has made a name for himself...thanks to his feeling for irony and his capacity to shape something new from propaganda, news and other historic images. Not to forget his very dry sense of humour” —Rotterdam International Film Festival

Jim Finn (b. St. Louis, 1968) makes what have been called "utopian comedies" and "trompe-l'oeil" films. His critically acclaimed films and videos use irony and historical fiction and facts to pull apart ideology, capitalism and revolutionary art practices among other things. He has screened internationally at festivals like Rotterdam, Sundance, Buenos Aires, AFI and Edinburgh as well as museums and cinematheques such as the Museo Reina Sofia in Madrid, the Danish Film Institute and the Harvard Film Archive. Interkosmos, the first of his trilogy of feature-length films looking at Marxist ideology, was called "a retro gust of communist utopianism" by the Village Voice and "charming and fantastic, so full of rare atmospheres" by Canadian filmmaker Guy Maddin. His second feature La Trinchera Luminosa del Presidente Gonzalo was put on the Village Voice's Top 10 Year in Experimental Film. And Variety called The Juche Idea, his film about a North Korean art residency, "brilliant" and said all three films "upturn notions of documentary and fiction, propaganda thought, reality and restaging, and even what an 'experimental film' actually is." He is currently working on a project looking at the connections between the Argentine dictatorship of the 70's with the U.S. War on Terror.