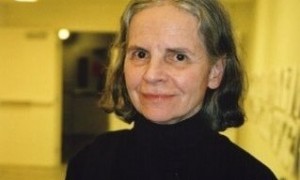 Joan Retallack's most recent poetry volume -- Procedural Elegies / Western Civ Cont’d / -- was named a best book of 2010 by ARTFORUM. Her poetry has also won the Columbia Book Award (chosen by Robert Creeley), a Lannan Foundation Award, and two Gertrude Stein Awards. Retallack is the author of MUSICAGE: John Cage in Conversation with Joan Retallack which received the 1996 America Award in Belles-Lettres. She has published numerous essays on Cage’s work, with particular attention to the relation of his experimental attitude to 20th century science, utopian aesthetics, and global socio-politics. Retallack has performed and served as dramaturg for multiple Cage productions, including Lecture on the Weather and James Joyce, Marcel Duchamp, Erik Satie: An Alphabet in which she played the role of Buckminster Fuller this Fall at the Fisher Performing Arts Center, Bard College. Retallack has exhibited and performed her own work in many venues, including the Guggenheim SoHo, Corcoran Gallery of Art, and Philadelphia Museum of Art. She has published eight volumes of poetry; a book on ethics and aesthetics--The Poethical Wager, Gertrude Stein: Selections, and wrote the critical introduction for Yale's recent republication of Stein's Stanzas in Meditation. Retallack is John D. and Catherine T. MacArthur Professor of Humanities at Bard College.