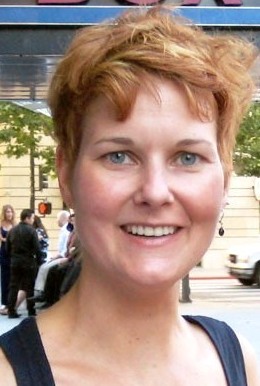 Paige Howie is a theatrical costumer, star dresser and wardrobe supervisor, whose job as touring wardrobe supervisor for dance companies and rock ‘n roll shows have taken her to almost every state in the continental U.S. and several major cities in Canada. She has also plied her skills as a wardrobe supervisor on two off-Broadway shows in NYC, as well as in Nashville, TN, for the Radio City Rockettes’ Christmas Spectacular show. Other memorable jobs include spending several summers in the Berkshires as costume designer assistant and wardrobe supervisor at Barrington Stage Company, and working as a stitcher on the Contact, Oklahoma!, Doctor Dolittle and Irving Berlin’s White Christmas national tours. Howie has worked alternately for San Jose Repertory Theatre and Berkeley Repertory Theatre for the last two years, and this fall will find her happily beginning a permanent position as Wardrobe Assistant and Wig Supervisor at Berkeley Repertory Theatre for the 2008-09 season. Howie holds degrees in Psychology and English from Appalachian State University in Boone, North Carolina, and is proud to call Charlotte, NC her hometown.