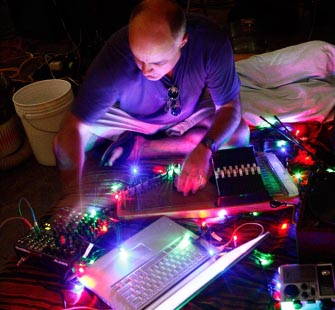 Tom Recchion has been a sound and visual artist/composer/art director & graphic designer in California since the 1970’s. He is the co-creator of the legendary Los Angeles Free Music Society (LAFMS). At the time he discarded object making (though he employs it now) and concentrated on the ephemeral nature of sound. His early practice in low-tech sonic exploration presaged many of the genres exciting developments of the last quarter century: record manipulation, live tape loops, free improvisation, found and invented instruments, installation, and more. In the LAFMS his group The Doo-Dooettes became one of the 3 anchor points for the collectives’ endeavors as well as playing in AIRWAY, and many other groupings of the collective. He’s collaborated with Half Japanese, Jad Fair, David Toop, Christian Marclay, Mark Trayle, Oren Ambarchi, Keiji Haino, Max Eastley, Sonic Youth, to name a few, as well as plays in the improvisational group Extended Organ (Paul McCarthy, Joe Potts, Fredrik Nilsen and Mike Kelley). Currently he is a secret member of Smegma, under the name Victor Sparks and has formed a ’spin-off’ group The Rodney Forest with fellow Smegma members Ju Suk Reet Meat and Oblivia/Rock and Roll Jackie who have just had a record released on Qubico in 2008. He’s remixed for Oren Ambarchi, The Electric Company, Sun, John Weise & Jim Thirwell. He also occasionally writes for WIRE magazine and has many recordings released. The solo releases “Freak Show” (cassette only), “Chaotica”, “I Love My Organ” and “Soundtracks To A Color: Gold & Black” (which accompanied a large scale installation), were released in 2004. In 2006 a new solo CD came out in Italy on Giuseppe Ielasi’s Schoolmap label as their inaugural release and a Christmas 7” single was recently released by Meeuw Muszak in Belgium. His work has led him to much fruitful collaboration with filmmakers such as Janie Gieser. The result of which ended up being selected in the New York Film Festival of 1999 & Kirby Dick, as well as video artists Bruce & Norman Yonemoto and Branda Miller and has done work for the theatre, dance and performance artists. He has recordings on Birdman, Touch, PSF, RRR, Pinokoteka, Barooni, Sub Rosa, Idea, Staubgold, Elevator Bath, Tigerbeat6, sound. and the Cortical Foundation. He was awarded a 2004 COLA Fellowship in the visual arts. In the summer of 2004 he was awarded Best New Genre/Uncatagorizable Artists by the LA Weekly Music Critics Poll. MOCA commissioned him to design and produce a listening room in support of their current exhibition “A Minimalist Future?” which lead to the production of a 6 hour DVD survey overview of minimalist musicians and curated 3 concerts which helped give birth to MOCA’s Immersion Concert series curated along with Robert Crouch. He is developing a composition for the Kronos Quartet. His most recent work was part of MOCA’s Visual Music exhibitions concert series; ‘See Hear Now!’ is an improvisation of sound and image with artist, filmmaker Jonathon Rosen. He also worked with film maker/puppeteer Janie Geiser on a theatre piece called “Invisible Glass” for Cal Arts that was staged at Redcat. He’s participated in SASSAS’ summer sound. series in an evening of filmmakers and composers where he premiered 3 older video and film works from the 1970’s that had never been show. Following that he has performed with the ROVA Saxophone Quartet along with Fred Frith, Nels Cline and Mark Trayle performing a version of John Coltrane’s Ascension also at the Redcat. Last year he was a participant in the LA 88 Boadrum concert featuring 88 drummers along with Japanese noise band the Boredoms. He is also a recipient of a Pasadena Cultural Arts grant for visual artists for which he will release a project called ‘78’, which is a 78rpm vinyl 10” lp that will be circulated in pubic spaces. Most recently he performed at the Getty Museum for the opening of the California Video retrospective where he created a live video and audio performance that was projected on the various walls of the complex and was a participant in Cal Arts – CIEAT Festival at the REDCAT. He will tour the UK in the fall of 09. For the past year he has developing a collaboration with Aaron Moore from Volcano the Bear.