The Art of Steven Siegel 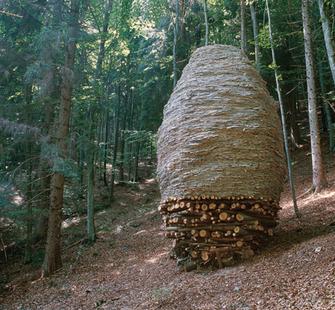 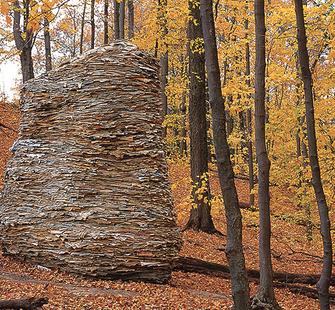 Funded in part by an Applied Materials Excellence in the Arts grant,
a program of Arts Council Silicon Valley.

Stories of Katrina and Nest on the Grounds

Steven Siegel is known for his large monolithic and site-specific sculpture made of recycled materials.  His mounded forms often look like boulders, vessels, containers, or geological formations. They are crafted, however, from the most common artifacts of contemporary culture—newsprint, cans and plastic.  Siegel’s method involves large accumulations of small things. In his enormous paper works, he layers and stacks tons of newspapers over large wooden armatures.  These works result in densely striated structures that reflect the artist’s long time interest in the landscape, particularly in geological formations, and the processes through which discarded materials are transformed over time. His fascination for evolutionary or geological “deep time” has led to him to emulate the natural layering cycles of sedimentation, compression, deposit and decay underlying the configurations of the earth. The artist’s intention is “to try to act as nature rather than interpret it.”

Like contemporary environmental geologists who increasingly study the restive relationship between the earth’s systems and human induced changes, Steven Siegel offers opportunities for speculation about patterns of decay evident in the “deep time” of geological history and the aggressive temporality of contemporary culture.

Over a three-week period beginning September 2005, the artist created his monumental sculpture, Stories of Katrina, on the front lawn by the Bunya Bunya tree, and a smaller paper piece, Nest, layered inside a circle of Bay Laurel trees on a trail behind the villa. The artist created the works in full public view with the help of several assistants (Carl Schmitz, Matt Isble, John Hylton and Julia Bradshaw), and many community volunteers. The San Jose Mercury News donated twenty-three cubic yards (50,000 papers or 22,000 pounds) of newspaper “overruns.” The majority of the newspapers delivered featured primarily the coverage of Hurricane Katrina. Like hidden fossils in the strata of the earth, this historic event remains concealed in the layers and stacks of newspapers. Over time, the newsprint will darken and soften, resembling natural materials such as slate or stone. For Siegel, the work will become more interesting as “the paper slowly changes appearance and starts to host various molds, fungi, insects and flora.”  Ideally, the artist intends his works to age and gradually decompose as the elements act upon them over time, providing compost for new life, and mimicking the cycles of nature. The piece was de-installed on August 9, 2006.

Siegel’s forms are richly nuanced with the weight of thousands of experiences and histories massed into bundles. Reflecting the interface between nature and culture, Stories of Katrina invites viewers to ponder the relationship between consumerism, the environment and the natural processes of decay.

Wonderful Life
According to Steven Siegel, "What interests me is the process of evolution and how that parallels the creative process.  I think of the primordial soup from which we supposedly evolved, and think about how a set of materials, under a narrow set of parameters, will organize themselves and adapt to changing conditions."

The exhibition features works made of materials such as yarn, string and pillow stuffing from Steven Siegel’s new series, Wonderful Life.  Resembling potholders, insect nests or mysterious bundles, these finely crafted works take evolutionary biology as their inspiration and over-arching metaphor. The series is is dedicated to the life and work of evolutionary biologist Stephen Jay Gould, and is named after his book, Wonderful Life (1989). Siegel notes:

The book is all about the explosion of life forms some 500 million years ago, discovered (in fossil form) in the Burgess Shale in the Canadian Rockies early in the last century…. It is Gould’s writing and the imagery that he conveys that [are] so inspiring.

Siegel also acknowledges the influence of British evolutionary biologist Richard Dawkins, whose book, The Selfish Gene, introduces concept of the importance of gene selection in evolution.

According to Siegel, his new body of work is modeled on “another way to organize materials.”  It takes as its point of departure the concept of a container or “the atom, the molecule, DNA, the cell, and the Body.”  Siegel’s meticulously constructed work reflects the artist’s passion for science and process.  His method involves repetition and change over time.

Siegel explains, “A living thing organizes itself differently than a rock does.  It defies gravity.  It has a center.”  Wanting to investigate how these forms might evolve over time, Siegel devised a system for cataloguing and eventually ending the series.  Employing the same approach that we use to name hurricanes, Siegel has named the works sequentially in alphabetical order, assigning two names for each of the 26 letters of the alphabet. The first work was Ann followed by Adam. As the series progressed, the works have evolved into several groupings or families with similar forms or traits. Wonderful Life will be completed when the artist creates 52 works.  The series remains in progress.