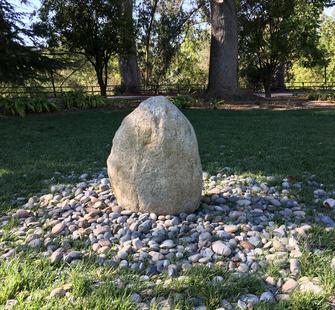 Continuing her interest in graduations within circles and concentric circles, Ijichi has created an outdoor installation which blends the concept of a Japanese Rock Garden with the French game, pétanque―a form of boules frequently played in public areas in parks. The artist has placed a large rock on Montalvo’s great lawn and invited guests to toss small river rocks as close as possible to the central rock. A rock sculpture was created over the duration of five hours, with a dense area of rocks in the middle and a gradation of fewer rocks toward the periphery.