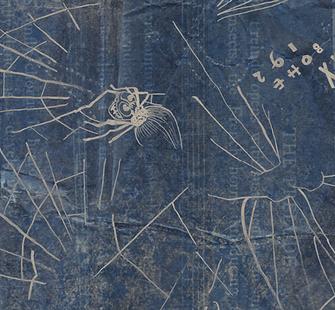 Vitiello presents a multi-channel work in Montalvo’s Lillian Fontaine Garden Theatre that will play at timed intervals throughout the day. The work is a sonic response to the script and musical score for the 1925 play Wings by Joseph S. Thompson, which Vitiello discovered in the collection of Montalvo’s Phelan Library. Vitiello describes being drawn to “an art deco-inspired drawing on the cover depicting beautiful winged creatures flying over mischievous spiders, and script notes describing such actions as, ‘the curiously syncopated theme of the earth bugs.’”

Created in collaboration with French horn player Dan Callaway, cellist Nora Krahl, flautist Jane Rigler, violinist Sara Soltau, and Foley artist Shelley Roden, the resulting piece is a theatrically vibrant sound installation not intended to illustrate the play but envisioned as an imagined companion piece filled with the fabricated flutter of wings, the padding steps through a spider's web and a propulsive musical track. Taking Sound Cues from Wings animates a space that -- aside from scheduled concerts and theatrical events -- is often empty, and conjures such disparate associations as historical plays that could have once been performed here, live broadcasts of radio dramas in the 1920s, and movie soundscapes.