By Alfredo and Isabel Aquilizan 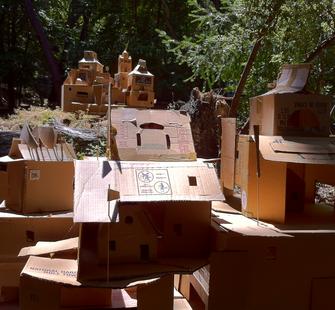 Lucas Artists Fellows Alfredo and Isabel Aquilizan (Brisbane, Australia) have created Wing in Ground, an airplane wing fashioned from recycled cardboard moving boxes constructed in collaboration with two members of the South Bay community. Located in the Linden Grove, above the West Lawn, this installation features cardboard boxes transformed into domiciles and buildings and arranged to resemble the urban topography of the region. The artists eventually intend to create an entire airplane from cardboard boxes and then cast it in concrete or aluminum.

Originally from the Philippines, Alfredo and Isabel Aquilizan have first-hand experience of the themes that permeate their work: migration, impermanence, displacement and the multifaceted concept of home. The artists’ use of everyday, inexpensive and ephemeral materials like cardboard reflects these themes.

With Wing in Ground and its partner piece, Dwellings: Project Another Country (Saratoga Hills) Isabel and Alfredo Aquilizan respond to Silicon Valley’s transformation from an agricultural region to an urban center with one of the country’s most diverse immigrant populations. Presented together these works reflect on forced or voluntary migration as well as the importance of home and community to our sense of wellbeing. Dwellings considers Silicon Valley’s expensive housing market ─ one of the priciest in the US ─ and its residential construction boom, while Wing in Ground examines how migration often results in permanent relocation and the construction of a new community elsewhere.

Wing in Ground is presented as part of COME HEALING, Montalvo Arts Center’s 2013 Art on the Grounds exhibition.

In most of our collaborative and community-based projects we aspire to create new relationships within the world and the foundation of these relationships is co-creation. We employ an interactive methodology, learning from each other through collaboration and creating… Migration has always been a central issue in most of our works. When we decided to leave the Philippines and migrate permanently in 2006, we became a part of that community of migrants who choose to live outside their home/land and to seek a better opportunity and chance. As we painfully integrate ourselves into what we call a rootless land or diaspora, identity is inconstant and its construction becomes a continuous process of negotiation. -Alfredo and Isabel Aquilizan