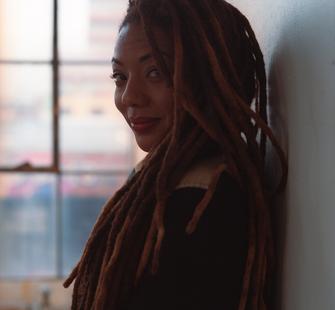 Jennifer Johns creates sounds and experiences that are sure
to stir your soul, inspire your mind and move your body. This powerhouse
vocalist, songwriter and producer vacillates between soul, hip hop, afro beat,
dancehall, rock, reggae, deep house and more.

Jennifer’s journey as a recording artist began in 2004 with
the underground success of her first album, HeavyElectroMagneticSoularPoeticJungleHop.
Songs like the title track “Heavy,” with its accompanying artfully futuristic
video, broke through the national underground scene, making Jennifer a notable
force in her field.  In 2007 she learned
the hard way about industry rule #4080 and was unable to release her sophomore
album, Painting on Wax. In spite of
the release issues, the project was still met with favorable reviews in media
such as the Chicago Tribune, SFChronicle, URB, and XLR8R. While the album in completion never saw the light
of day, songs like Ghetto International,
Let the Drum Moan and Chasing the Sun
made their way to independent radio and mixshows around the world.

Jennifer never stopped making music or performing. However,
until recently, Ms. Johns has not released much music for public consumption.
“I needed some time to remember why I was given this talent and what it is
for…” says Johns about taking some space from the entertainment industry.

In response to her need for meaning in her craft, she
shifted her intention from the entertainment industry to leveraging her art for
social movements. Immediately she began to find herself sharing stages with
thought leaders like Van Jones, Dr. Michael Beckwith, Phaedra Ellis Lampkins, Malkiya
Cyril, Shawn Ginwright and others. Her brand of soul-inspiring sounds have
landed her gigs at The Kennedy Center, The Apollo, and on stage for both NFL
World Bowl and The NFL Hall of Fame.

Over the last eight years, Jennifer has also become a Green
For All Fellow, a BoldFood Fellow, the Artist in Residence at Food First, the
First Artist in Residence at Langston Hughes Center for Performing Arts
Institute, and a Kapor Foundation Grantee two times over for her video journal
on sustainability and poverty called Go
Liv.

In February of 2016, Jennifer began a journey called The
F.U.N. Manifesto to ask people about their ideas of freedom. What was meant to
be a three-week trip became a 10-month odyssey that ultimately produced
Jennifer’s first official release in nearly 10 years, AZANIA.