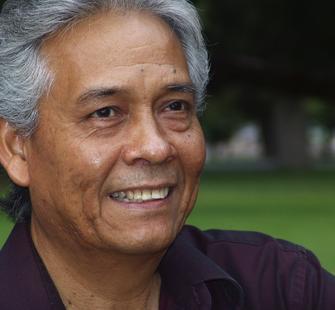 “Witty and fiercely political, Lira
pointedly takes on such issues as racism, ethnic stereotypes and the
current war in Iraq. He has a knack for combining crowd appealing
humor and harsh criticism of the system at large.”
– Donald Munro, The Fresno Bee,
2007

Born in Torreon, Coahuila, Mexico, in
1945, Agustin Lira (NEA National Heritage Fellow, 2007) emigrated
first to Lordsburg, New Mexico and then shortly after to California
with his mother, brothers, sister, and a cousin at the age of seven.
The family wandered through small, farmworker towns and labor camps,
following the crops up and down the San Joaquin Valley, finally
settling in Selma.

In 1965, at the age of 19, he cofounded
El Teatro Campesino with Luis Valdez during the Delano Grape Strike
headed by Cesar Chavez. The company created songs and plays,
performed on picket lines, at rallies and toured throughout the
United States, giving voice to the farmworkers’ plight and
demonstrating the power of artistic expression in uniting and
inspiring the farmworker communities.

Campesino received the New York Off
Broadway Award, the Los Angeles Drama Critic’s Circle Award,
appeared at the Newport Folk Festival and was the subject of feature
articles in Time, Newsweek, and the Wall Street Journal. Lira’s
powerful singing and socially relevant lyrics were at the heart of El
Teatro Campesino and established his role as the preeminent musical
voice of the early Chicano Movement. Lira blended Mexican song
traditions with Anglo folk and popular musical forms to create a new
kind of folk music that continues to evolve.

After leaving Campesino in 1969,
Agustin resumed his work in music and theater, forming several
theater groups notably El Teatro de la Tierra which dramatized the
urban Chicano experience. He also taught drama, music, and creative
writing at universities, schools, and community organizations
throughout California. With musical group Alma (formed in 1979 by
Lira and Patricia Wells Solorzano), he has performed at national and
international festivals in the United States, Mexico and Cuba.

Lira has produced numerous recordings
over the years and was recently highlighted prominently on the
Smithsonian Folkways retrospective Rolas de Aztlan: Songs of the
Chicano Movement. His music has appeared in theatrical productions,
film and has himself been the subject of two award-winning NPR and
Latino USA radio documentaries by journalist Jon Beaupre. Previous
recognition of Lira’s work includes the California Latino
Legislative Caucus Award, 2007; Organizational Way of Peace Award,
2007, from the Fresno Center for Nonviolence; Local Hero Award, 2006
from Valley Public Television, Channel 18 and Union Bank.

“You always carry Agustin’s music
with you. It is inspirational, visionary and spiritual.”
– Dolores Huerta,
Cofounder United Farm Workers Union