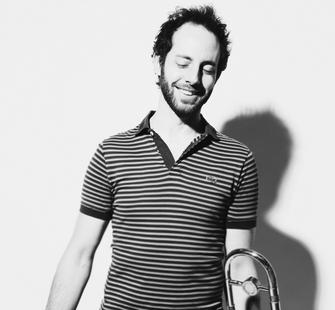 Alex Asher is a trombonist, improvisor and
composer living in Brooklyn, NY.  He is the
bandleader and primary songwriter for polyrhythmic, indie-soul band People’s
Champs, which has performed at BRIC Celebrate Brooklyn! Festival, The MoMA, The
Guggenheim and toured throughout the USA. He also leads Los Cumpleaños, an
experimental collaboration between musicians from Colombia, Argentina and the
USA. Alex co-leads The Superpower Horns, studio horn
section for Beyoncé Knowles and touring horn section for Boy George & Culture
Club, amongst others. The group wrote and arranged the horn lines on
Grammy-award winning songs from Beyoncé’s 2011 album ’4′.