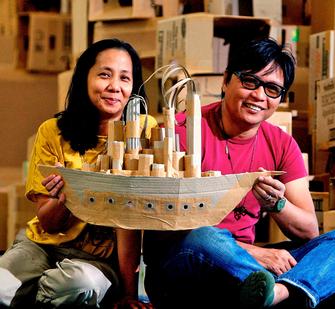 Maria Isabel Gaudinez-Aquilizan
and Alfredo Juan Aquilizan, a husband and wife artistic team, were born in the
Philippines, in 1965 and 1962 respectively.
They currently reside along with their five children and work in
Brisbane, Australia.

Alfredo
Aquilizan is an artist of broad sympathies. He draws, paints, sculpts, mixes
media, creates assemblages, and initiates installation projects. His work
heavily draws on memory of home and country. In undertaking this kind of
artistic process, he collaborates with the people around him and forges
connections among them. In gathering letters, domestic items, mementoes, baby
sweaters, toothbrushes, blankets, and photographs of young people for
identification cards, he restores the ecology of art as a system of
interaction, mutual critique of differences, and the possibilities of the
convergence of communities.

Alfredo
Aquilizan earned his fine arts degree from the Philippine Women’s University in
1986 and his master’s from the Polytechnic University, Norwich College of Art
in England. He is currently pursuing his doctorate in Qualitative Comparative Analysis.
Together with wife Isabel, he has exhibited at biennales/triennials like
Venice, Sydney, Gwanju and Singapore among others and has been commissioned by
the Tate Liverpool. He taught at the Philippine High School for the Arts and
the University of the Philippines at Los Baños.

Isabel
Aquilizan is a teacher and artist of the performing arts.  She is a director and actress.  Her engagement with the process of performance
and its inherent collaborative possibilities led her to her collaborative
partnership with her husband in installations that cross gaps between media and
distances. Her role as a mother of five children enables her to intervene in
recreating the art of installation as home or habitat that is sustained by
housekeeping, child rearing, nurturing, and the collecting of memories.  She completed her degree in Communication
Arts at the Assumption in 1986 and taught at the Philippine High School for the
Arts.