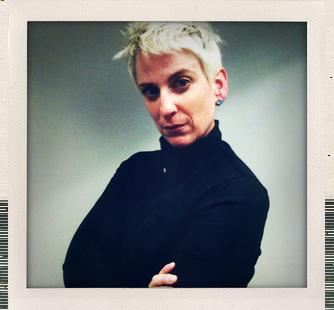 Amy Caterina was born in 1973, in, the Honeymoon Capital of the World, Niagara Falls, NY.

In1998, she left the east coast and traveled west to California. Caterina studied at California State University Fullerton where she received her M.F.A. in Photography in 2002.

After college, Caterina co-founded Rat Powered Films, an organization dedicated to the presentation of art films from around the globe. With fellow artist Bob Pece, they have been screening films from their home base in the Grand Central Theatre in Santa Ana, California.

Caterina has continued to work on photo and film projects while teaching at various colleges and, in 2004, she completed “6 Shorts About (non) Motherhood,” a short film that investigates conventions and assumptions about marriage and having a baby. In early 2005,Caterina started knitting and began Pseudo-Sod, a series that quickly emerged as a major component in her evolving oeuvre of mixed media installations. She was selected to be the artist-in-residence at the Huntington Beach Art Center in conjunction with the exhibition “MANufacture”; during her residency she displays mixed media knitted “grass” covered deer and moose, beside four cemetery plot sized sections of “grass.” The Pseudo-Sod car cover was also featured in 2005 for the first time and presented in various locations throughout Orange County.

In 2008, Caterina was the artist-in-residence at the CSUF Grand Central Art Center in Santa Ana, California, opening her first solo exhibition titled, “This used to be real estate, now it’s only fields and trees.”

In 2009, Caterina and Pece (Rat Powered Films) received a grant from the Downtown Santa Ana Business Council and National Alliance of Mental Illness Orange County. They have several film projects in the works including “Consumption,” a collection of short films interviewing people who work in the field of mental health, consumers, and people who have experienced the stigma of mental illness, “Art-as-Anodyne,” interviews with men and women in conjunction with A Window Between Worlds, a non-profit organization dedicated to using art to help end domestic violence, and a series if interviews that will be featured at CSU Fullerton in April as part of an exhibition chronicling the history of the art department.

This July, she will be an artist-in-resident at the Montalvo Arts Center in Saratoga, CA, and in August will have a solo exhibition at Coastline Community College.