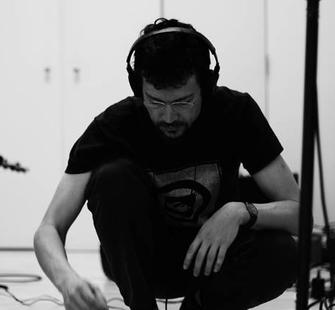 Andres
Solis is a
composer and sound artist. His work has focused on exploring free musical forms
that intend to dilute the rigid constraints imposed by traditional musical
structures. He has sought to assimilate his environment to find his own
language through computer assisted composition, improvisation and
interdisciplinary artistic collaborations. A special attraction for the
performing and cinematic arts has led him to collaborate on different projects
of theater, dance, video art, sound design and film music. He has also worked
with prepared turntables and modified acoustic instruments in combination with
analog and digital processing tools. His academic training started in 1989 in
Mexico City at the C.I.E.M. (Musical Studies and Research Center). Then he
moved to Holland to continue at the Royal Conservatory in The Hague, where he
studied with Clarence Barlow. Later, in Paris, with the support of a grant from
the French Government, he concluded a postgraduate degree (DEA) under the
supervision of Horacio Vaggione in the department of Sciences of Performing
Arts in Paris 8 University, Saint-Denis. He was co-director of the experimental
music festivals AURAL and RADAR in México City. In 2012 he entered the National
System of Art Creators of FONCA.

To hear some of Solis’ compositions, visit www.soundcloud.com/andres-solis71.