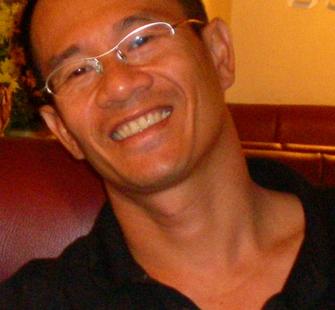 Andrew X. Pham is an independent writer, journalist, culinary professional, and engineer. He received a B.S. in Aerospace Engineering from the University of California, Los Angeles, in 1990, and worked as an aircraft engineer before becoming a freelance technical writer and journalist. From 1994 to 2000, he was a book reviewer, food writer, and restaurant critic for Metro Newspapers in Silicon Valley, California.

His first book, Catfish and Mandala: A Two-Wheeled Voyage through the Landscape and Memory of Vietnam (1999), is both an immigrant memoir and an adventure travelogue. It won the Kiriyama Prize, the Whiting Writers’ Award, Quality Paperback Book Prize, and the Oregon Literature Prize. It was also named a Guardian Prize Shortlist Finalist and a New York Times Notable Book of the Year.

In his second book, The Eaves of Heaven: A Life in Three Wars (2008), Pham takes on his father’s voice to write the elder Pham’s memoir, narrating a life in the most tumultuous period of Vietnam’s history, from 1935 to 1975. A finalist for the National Book Critics Circle Award, it was also selected as one of the Los Angeles TimesFavorite Books of 2008, the Washington Post Top Ten Books of the Year, theOregonian Top Ten National Books of the Year, and Bookmarks MagazineBest Books of 2008.

Last Night I Dreamed of Peace (2008) is Pham’s translation (with the help of his father) of Dr. Thuy Tram’s diary, which was written during the Vietnam War and considered a national treasure by historians and academics. This English version is being translated into multiple languages.

Pham next two books to be released in March 2012 are A Culinary Odyssey: A Southeast Asian Cookbook Diary of Travels, Flavors, and Memories and A Theory of Flight: Recollections. He is working on the last book in his Vietnam trilogy, The Japanese Officer: A Love Story.

He lives, farms, tinkers, and writes from a wooden bungalow he built on the Mekong River on the Thai-Laos border with his wife and two dogs.