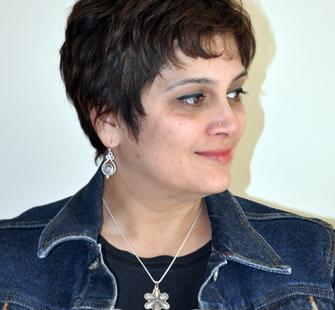 Anila Quayyum Agha was born and raised in Lahore, Pakistan and received her BFA from the National College of Arts, Lahore and an MFA from the University of North Texas. Agha’s work has been exhibited in multiple international/national art fairs, biennials, and exhibitions. Recent solo shows include the National Sculpture Museum (Valladolid), Cincinnati Art Museum, Grand Rapids Art Museum, and the Museum of Contemporary Art (Jacksonville). For the 2019 Venice Biennale, Agha was included in a collateral event titled She Persists along with 22 contemporary feminist artists. Agha has received the Efroymson Art Fellowship, the Creative Renewal Fellowship from Indy Arts Council, Cincinnati Art Museum’s 2017 Schiele Prize, and the DeHaan Artist of Distinction Award. Agha won the two top prizes at ArtPrize 2014 in Grand Rapids, Michigan where her entry, titled Intersections, earned the Public Vote Grand Prize and split the Juried Grand Prize in a tie. In 2017, she was awarded the Glenn W. Irwin, Jr., MD Research Scholar Award by Indiana University. Her work has been collected by both institutions and private collectors.