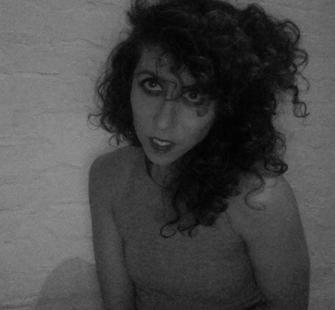 Named one
of Flavorwire’s 100 best living writers and “a crucial voice of her
generation” by Michael Silverblatt, Ariana Reines is a
poet, playwright, performing artist, and translator.  Her books include
The Cow (Alberta Prize, 2006), Coeur de Lion (2007); Mercury (2011), and The
Origin of the World (2014) from Semiotext(e). A SAND BOOK, her next poetry
collection, is forthcoming in 2019.  Her
newest book is TELEPHONE (2018) based on her Obie-winning first play (2009)
commissioned by The Foundry Theatre and recently performed in Norwegian
translation (2017) and at KW Berlin (2018). FRANCESCA, a play by Nathalie
Rozanes based on writings & performances by Reines premiered at
the National Theatre of Belgium in 2016. Other performance & theatrical
works include: MORTAL KOMBAT (2015), commissioned by Le Mouvement Biel/Bienne
& performed at The Whitney Museum, New York, NY, USA, & Gallery TPW,
Toronto, CA, and LORNA (2013) at Martin E. Segal Theatre, New York, USA, both
in collaboration with Jim Fletcher, The Origin of the World (2013) at Modern
Art, London UK, & many others. Art exhibitions include PUBIC SPACE (2016),
a collaboration with Oscar Tuazon at Modern Art in London, UK, EXHAUST
(2016) at Contemporary Art Tasmania, AU, and JANE DARK (2014) at Western Front,
Vancouver, CA.  Reines is the translator of Baudelaire’s My
Heart Laid Bare (Mal-O-Mar, 2009); Jean-Luc Hennig’s The Little Black Book of
Grisélidis Réal: Days and Nights of an Anarchist Whore (Semiotext(e) 2009); and
Tiqqun’s Preliminary Materials Toward a Theory of the Young-Girl (Semiotext(e)
2012). She has taught at Columbia University, the European Graduate School,
NYU, Tufts, Naropa, The New School, Yale & many other places. In 2009 she
was Roberta C. Holloway Lecturer in Poetry at the University of
California-Berkeley.  Her poetry, essays, & interviews have appeared
in Artforum, Art in America, The Believer, The Boston Review, Bomb, Granta,
Harpers, The Los Angeles Review of Books, & many others.  She has been a MacDowell Fellow, a resident
at the TS Eliot House, a fellow at The Center for the Humanities at Tufts, a
Brown Foundation Fellow at the Dora Maar House, has judged the National Poetry
Series, and is a nominator for the Foundation for Contemporary Art. Ariana works with writers and artists through
her astrology consultancy at lazyeyehaver.com.