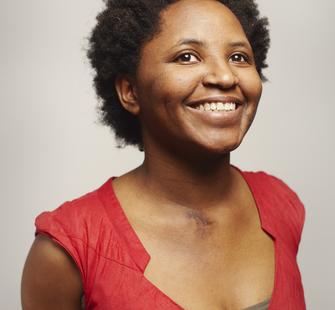 Lierman was born in
Rwanda but, after the age of two, raised in Belgium. An independent radio
producer, vocalist, and composer, her work fuses radio art, vocal art, and
composition. Her main focus is her personal field recordings: a large
collection of unique sounds and soundscapes from rural and urban contemporary
East Africa. Sound-bit by sound-bit, she transforms and sculpts them into
something she calls “Afrique Concrète.” Her work has been broadcast,
exhibited, and performed throughout Europe, Israel, Morocco, South
Africa, Tanzania, and the United States. In 2013, she was awarded first prize
at Sonic Art (Rome) for her radio composition KARIAKOO (a
sonic portrait of a lively neighborhood in Dar Es Salaam,
Tanzania). In the same year, she also won the third prize at Grand
Prix Nova (Bucharest) for her radio composition iota mikro (based
on field recordings from her birthplace, Mount Karisimbi volcano, in
Rwanda). In May 2014, she won the First Prize at Monophonic 2014
(Brussels) for Anosmia, a radio composition reflecting on the
Rwandan Genocide. She has released two albums with the British cult-group
Nurse With Wound and collaborated with visual artist Vincent Meessen (the
Belgian entrant for the 2015 Venice Biennale) on his recent exhibition at
Kunsthalle Basel in Switzerland. Read more ataurelielierman.be.