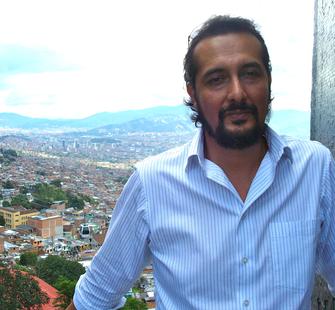 Bill Kelley, Jr. is an educator, curator and
writer based in Los Angeles. He graduated with a Master’s in 19th Century
Colonial Art Studies from the University of New Mexico, Albuquerque (UNM).
His current research focuses on collaborative and collective art practices in
the Americas. Bill has written for such journals as Afterall, P.E.A.R., and Log
Journal. His most recent projects include being co-curator of the 2011 Encuentro
Internacional de Medellín (MDE11: Museo de Antioquia, Medellín, Colombia,
2011) as well as acting as the 2012-2013 Curator in Residence for 18th Street Art Center. Bill is the former Director
of the online bilingual journal LatinArt.com and is Associate Professor
at Otis College of Art’s Graduate Public Practice MFA program. He is currently
completing his Ph.D. in Contemporary Art, Theory and Criticism at the
University of California at San Diego (UCSD), and is co-editing an
anthology with Grant Kester of collaborative and dialogical art practices in
the Americas entitled: Collective Situations: Readings in Contemporary Latin
American Art 1995-2010(Duke University Press, forthcoming). He most
recently organized the two-day convening LA/LA: Place + Practice for the
Getty Foundation and The Getty Research Institute (May 2 & 4, 2015) and is
currently the Lead Researcher and Curator of Talking to Action, Otis
College of Art’s contribution to the Getty’s Pacific Standard Time: LA/LA
(2017).