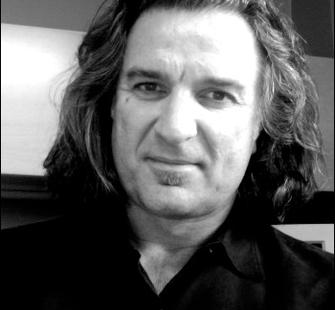 Composer,
Bruno Louchouarn
was born in France, raised in Mexico City and moved to America to
work in film music. He studied artificial intelligence in Paris and
obtained a Ph.D. in music composition at UCLA. He teaches music,
multimedia, and cognitive science at Occidental College. Premieres of
his new music have been performed at venues including UCLA’s Royce
Hall, RedCat in Disney Hall, the Getty Center, and Juilliard. He has
extensive film and commercial credits in both the United States and
Mexico. His practice
bridges music, film, and art installations,
from the futuristic cantina music heard in the film Total
Recall to live
experimental multimedia performances, works for large orchestra and
music for the theater.  His musical work is frequently informed
by cognitive aspects of music, the structure of myths, and rhetoric.

Recent
works include: It
Happened One Night,
chamber work with video, premiered by Ensemble Green. Images
Surfacing, a
ballet choreographed by Cydney Spohn at the University of Akron.
ReTouR,
music and video, premiered at RedCat in Disney Hall. Surf
Orpheus, an
innovative rock opera created with director/book writer, Corey Madden
and choreographer, Jacques Heim,
at UCSD and the Getty Villa. Original music for Agamemnon
and directed
by Stephen Wadsworth at the Getty, with Tyne Daly as Clytemnestra. Of
Mice and Men, at
the Pasadena Playhouse. Shekinah,
at La MaMa, New York.