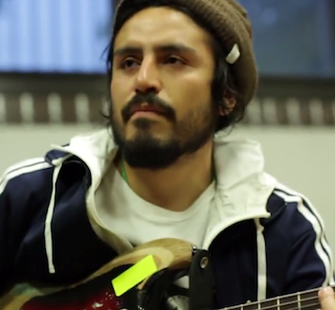 Camilo
Rodriguez is a Queens, New York-based guitarist and percussionist. Originally
from Colombia, Camilo founded the genre-defying M.A.K.U. Soundsystem along with
a group of Colombian expats. M.A.K.U Soundsystem has released two full-length
albums and toured the U.S. with their signature blend of Caribbean grooves,
psychedelic rock and traditional folk.Lyrically, the group addresses social
issues facing Colombia and the diasporic experience in the United States.
Outside of M.A.K.U., Camilo performs with the sublime latin dub group El Combo
Chimbita and La Cumbiamba Eneye, an ensemble that plays traditional music from
Colombia’s Atlantic Coast. “I play music because it’s a need. It’s a way
to express to others my views of life and my experiences,” says Camilo.
“Music is a space for honesty, a participative tool that unifies people
and connects us with our spirituality.”