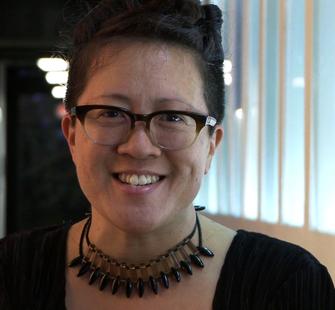 CAROLE KIM is an interdisciplinary artist with a focus on live video performance and performance-based video installation. She explores video for its most tactile, expressive and responsive potential as a live medium. Kim is interested in the experiential impact of emergent technologies and their metaphorical potential. She seeks an integration of media where moving image, sound, dance and space are on equal planes engaging in a dynamic reciprocating and mutually supportive dialogue. Kim’s installations are hybrid spaces in which the illusory and actual (i.e. mediated and live) merge together in an “other worldly” environment.

She has exhibited and performed widely in the US and abroad. Recent performance venues include the Museum of Contemporary Art-Los Angeles, REDCAT/Disney Hall, the Getty Center, AxS Art and Science Festival- Art Center Wind Tunnel Gallery, Springwave Festival/LIG Performing Arts Hall (Seoul, Korea), Decibel Festival/Seattle, the Stanford Jazz Festival, Issue Project Room and Engine 27 (New York), Arts, Media and Engineering Program (AME) Arizona State University (Tempe, AZ) and the Knitting Factory (LA). Her single-channel work has been screened at the Museum of Modern Art-New York, Trampoline: Platform for New Media Art (Nottingham, England), ArtSonje Center (Seoul, Korea) plus numerous festivals in Brazil, Australia, Japan, Germany, England, Estonia and Latvia. Recently, she was in residence at AUTOMATA-LA, Lehrer Architects-LA, Montalvo Arts Center-Saratoga, a Master Artist-in-Residence at the Atlantic Center for the Arts-FL, and a Cultural Crossroads resident at the Holter Museum of Art in Montana. Her work has been supported by the Irvine Foundation, National Endowment for the Arts, Pasadena Arts Council, Durfee Foundation, REDCAT, University of California Institute for Research in the Arts (UCIRA), The Getty Center, The Society for the Activation of Social Space through Art and Sound (SASSAS), Newtown, Turbulence.org, California Institute of the Arts, and The Center for Experiments in Art, Information, and Technology. She has been selected as a recipient of a 2013 COLA Fellowship.