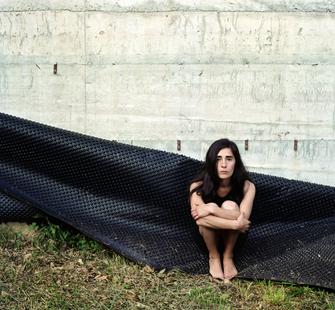 Claudia de Serpa Soares was born in Lisbon.She studied dance with Isabel Merlini and Luis Xarez before joining Lisbon School of Dance Conservatorio Nacional and the Superior School of Dance.She followed her studies in France at the Centre National de Danse Contemporaine d’Angers.She subsequently worked with Iztok Kovac in Slovenia and Paulo Ribeiro in Lisbon,amoung others.In 1999 she joined the dance ensemble of the Schaubunhe Theatre in Berlin under the artistic direction of Sasha Waltz.In the following years she also performed with Luc Dunberry,Benoit Lachambre,Isabelle Shad and Junko Wada.Since 2003 ,Claudia has choreographed films for Eve Sussman and The Rufus Corporation: “89 Seconds at Alcazar” and “The Rape of the Sabine Women”.She also co-directed and performed “Crossroads” with actor Ronald Kukulies and “Edgar” a duet with Grayson Millwood (Tanz in August 2007). In 2008 she took part as an actress in “Fish Love” a theater piece based on Tchekov novels and directed by Lilo Baur in Lausanne and Paris. In 2009 she choreographed the piece “Surovo” for the En-Knap’s company repertory in Ljubljana.
She still tours SashaWaltz’s repertory pieces and she joins the company in improvisations or short term projects.
In may 2011 she assisted the director Lilo Baur and choreographed the production “Dido and Eneas” at Opera de Dijon.
In February 2012 she assisted Jochen Sandig and choreographed for the piece “Human Requiem” with the Rundfunk Choir Berlin under the musical direction of Simon Halsey. In the same year she also took part in the educational project in Berlin ,“Carmen” under the direction of Sasha Waltz with the Berlin Philarmonic.
In October 2012 she takes part as an actress in the play “Le 6eme Continent” directed by Lilo Baur with text from Daniel Pennac in the Theatre des Bouffes du Nord in Paris.