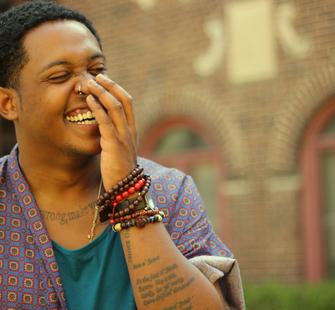 Danez
Smith is a black, queer, poz writer & performer from St. Paul, Minnesota.
Danez’s Don’t Call Us Dead (Graywolf
Press, 2017) was a finalist for the 2017 National Book Award. Their debut
collection [insert] boy (YesYes
Books, 2014) was the winner of the Kate Tufts Discovery Award, the Lambda
Literary Award for Gay Poetry, and the John C. Zacharis Award from
Ploughshares. Danez’s work has been featured widely including on Buzzfeed,
Granta, PBS NewsHour, and on the Late Show with Stephen Colbert. They are the
recipient of fellowships from the Poetry Foundation, the McKnight Foundation,
and a 2017 National Endowment for the Arts Fellow. They are a two-time
Individual World Poetry Slam finalist, four-time Rustbelt Poetry Slam Champion,
and a founding member of the Dark Noise Collective. Danez is a Literary Fellow
at the Lucas Artists Program at Montalvo Arts Center. With their recent work
Danez investigates friendship and intimacy – particularly working through
intersections with humor, race, loss, and time – in both poetry and fiction.