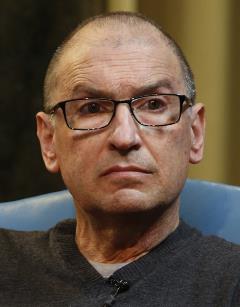 Daniel Bertrand Monk holds the George R. and Myra T. Cooley
Chair in Peace and Conflict Studies at Colgate University, where he is a
professor of Geography and Middle-Eastern and Islamic Studies. He is the author
of An Aesthetic Occupation as well as
a number of other studies on the Israel-Palestine conflict, Middle East wars,
the post-conflict environments, refugees and humanitarianism. Together with
Mike Davis he has edited Evil Paradises:
The Dreamworlds of Neoliberalism (New Press, 2007). Together with Jacob
Mundy he has also edited The
Post-Conflict Environment: Intervention and Critique (University of
Michigan Press, 2014).  Monk has been
awarded a Mac-Arthur Foundation Fellowship in International Peace and Security,
as well as a Woodrow Wilson Fellowship for his research on contemporary
conflict. Originally trained as an architect, Monk is now working on “The
Global Shelter Imaginary,” a critical analysis of the way that the
international humanitarian order generates and publicizes proposals to house
the planet’s displaced populations.