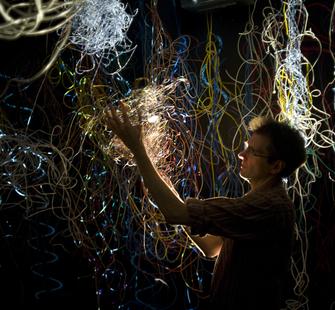 Daniel Canogar works with photography, video, sculpture, and installation. He has been commissioned to produce several large-scale public artworks, amongst them: Travesías, an LED sculptural screen created for the atrium of the European Union Council in Brussels; Constellations, a photo-mosaic across pedestrian bridges in Madrid’s Parque Rio Manzanares (the largest of its kind in Europe); Nodi, two permanent photographic murals in the Arensa Train Station in Naples; and Clandestinos, a series of video projections on emblematic public monuments in Rio de Janeiro, Madrid, and Rome.

Canogar earned a Masters Degree specializing in photography from New York University and the International Center for Photography in 1990. Written publications include Ephemeral Cities: Universal Expositions, Spectacle and Technology (1992), Ingrávidos (2003), and various essays on the architecture of image, contemporary photography, and new media art. His artwork has been exhibited at numerous museums and galleries in Europe and the United States