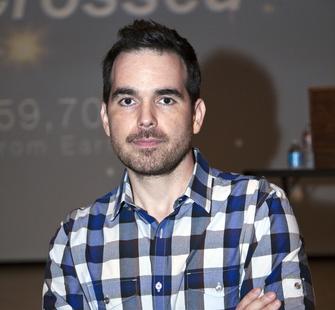 Dario
Robleto is a transdisciplinary artist, citizen-scientist, researcher, writer
and teacher based in Houston, Texas. He has had numerous solo exhibitions since
1997, most recently at the Menil Collection, Houston, TX (2014) and the
Baltimore Museum of Art (2014). Robleto has been a visiting artist and lecturer
at many universities and institutions including Massachusetts Institute of
Technology, Cambridge, MA, and the Hubble Space Telescope Science Institute,
Baltimore, MD. In 2013-14 he served as the California College of the Arts Viola
Frey Distinguished Visiting Professor, Oakland, California. Robleto is the
recipient of both the Joan Mitchell Foundation Grant (2007) and the USA
Rasmuson Fellowship (2009). He has been a research fellow and resident at
institutions such as Rice University (2013-14) and the Smithsonian Museum of
American History (2011). He is currently serving as an Artist-in-Residence in
Neuroaesthetics at the University of Houston’s Cullen College of Engineering
and at the SETI Institute in Mountain View, CA. He was recently appointed as
the 2016 Texas State Artist Laureate. Robleto is also a Guest Artist at the
Lucas Artist Program at Montalvo Arts Center.