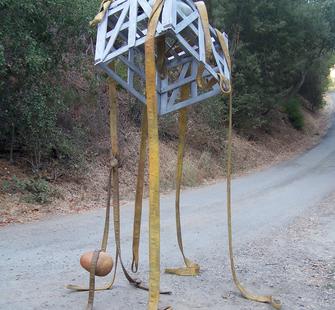 David Middlebrook is an artist who traces his roots to ceramics and who has evolved to become a professional sculptor specializing in site-specific work, public and private commissions, and smaller sculptural elements. He was born and raised in Jackson, Michigan and went on to earn his M.F.A from the University of Iowa in 1970. He burst into the art world and quickly became an inspiring pioneer in a ceramic art movement that was gaining momentum in the late 1970’s. He accepted a teaching position at San Jose State University in 1974, relocated to California and has maintained a studio in the hills of south bay’s Los Gatos ever since.

David has had several transforming experiences that have molded him into the artist he is today. In 1980, he gathered his family and moved to the northern tip of Australia where he held the post of visiting artist at the University of Darwin. And then in 1982 he took a similar position at the University of Natal in Pietermaritzburg, South Africa. Both experiences were 1-year excursions and allowed David to explore these two remarkable countries. His travels put him in direct contact with the respective native cultures of each country and their unique artistic vision of life. This exposure proved to be quite influential in terms of content as the primitive aesthetic continues to find it way into David’s work to this day.

As a master of ceramics and all its applications, for years David had struggled with the instability of this material and found many of its characteristics to be limiting. In 1983 he traveled to Northern Italy and discovered stone and it changed his approach to art forever. Since that trip, he has maintained a professional relationship with a studio in Pietrasanta, Italy. The availability of virtually every stone in the world, a thousand years of experience and tradition in stone and their specialized technology to fabricate make this Italian resource an invaluable asset. In addition to the 2 trips he makes to Italy each year, David maintains his status as Associate Director of Fine Arts at SJSU, which affords him the use of the university foundry for his bronze work.

Over the last 20 years, David Middlebrook as evolved as an artist and has become a master of materials. His work today involves a broad range of stone marble and bronze and dimensions from 50 lbs. to 50 tons. He has established himself as a specialist in large-scale site-specific work. These projects have fostered collaborations with architects, design professionals, developers and contractors. He has completed approximately 50 public and private works of this nature, many of which were nationally-awarded competition commissions.

Represented by the following galleries: