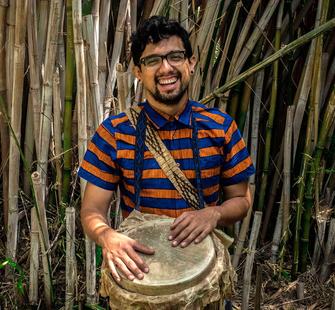 Eduardo Valencia is a San Bernardino-based percussionist and radio DJ. Born to parents from Colima, Mexico, Eduardo is fascinated with the intertwining rhythms of Central and South America, Africa and the West Indies. A deft player on numerous percussive instruments, Eduardo mostly taught himself congas, tambor alegre and drum kit. While attending the University of California, Riverside, Eduardo became deeply involved with his college radio station, KUCR 88.3 FM, where he continues to serve as an assistant manager and hosts a radio show highlighting diasporic music. Eduardo is a founder of the tropical combo QUITAPENAS and YANGA, and performs alongside other polyrhythmic Afro-Latin ensembles in Southern California.