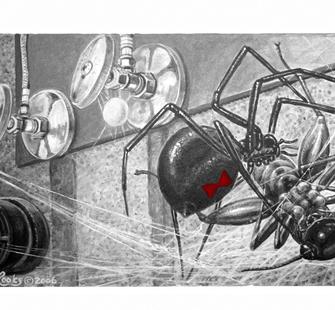 Born and raised in Trinidad and Tobago, Edward Rooks has illustrated many of
the island nation’s threatened animals in their native habitat as commissions
for nature enthusiasts and biologists. Currently, Edward is a naturalist and
wildlife artist living in San Jose, California, where he teaches drawing and
painting workshops and college courses, leads nature tours and creates acrylic
paintings.

He has taught bird drawing for the Santa Clara Valley Audubon Society, for Montalvo
Arts Center’s Art in the Barn, at the annual Central Valley Birding
Symposium in Stockton, and at the California Fish and Wildlife’s Wild on
Wetlands Weekend in Los Banos, CA. Edward and his wife, Janice Edgerly-Rooks,
were the nature consultants for Shona Kitchen‘s Domestic Wildnerness
Channel at Montalvo’s Project Space, November 2006-January 2007.

Edward’s
painting of Trinidad’s Oilbirds won a 1st place award in a juried art
show at the Los Gatos Art Gallery in 1994. His painting of a California
Tiger Salamander won the 1st place award in the California Department
of Fish and Game’s Native Species Stamp Contest in 1994. His Golden
Trout appeared on the California Sport Fishing License in 1993. He
designed a wine label for Johnston’s Vineyard of Napa Valley, that won
a Gold Medal in the label contest of the New World International Wine
Competition in 1996.

Edward’s
illustrations appear in biological journals, nature magazines,
booklets, newsletters and on a brochure depicting 37 birds of the Asa
Wright Nature Centre, and on the cover of the
Santa Clara Valley Audubon Society’s 2007 Breeding Bird Atlas of Santa Clara
County. Three Calendars based on his
illustrations have been sold in Trinidad and Tobago.