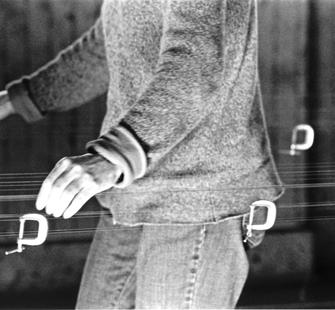 Ellen Fullman
is a composer and performer based in Berkeley, California. Born and raised in
Memphis, Tennessee, as a teenager she became inspired by the sounds native to
her region: Delta blues music. At the age of one, she was kissed by Elvis, who
said to her, “Hi-ya baby!” Fullman studied sculpture at the Kansas City Art
Institute where she learned of the work of Harry Partch. Inspired by Alvin
Lucier’s Music on a Long Thin Wire,
she suspended long wires in her loft studio in St. Paul Minnesota and
experimented with different forms of manual articulation.  Through an
accidental discovery of the longitudinal mode of vibration, Fullman invented
the Long String Instrument, which has remained at the core of her creative
life. The process of refining and articulating this instrument has led her to
experimenting with wire alloys and gauges; designing resonators and tuning
capos; creating a graphic notation form that defines time by distance walked;
and studying natural tuning and North Indian vocal music, among many other
things, in her quest to “Let the strings sing their own song.”