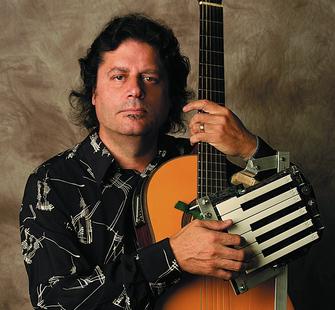 Ernesto Martinez is a composer,
inventor, pianist, and piano tuner. He is interested in exploring composition,
performance and human perception on motion disciplines like music and dance. Martinez
studied composition at The National School of Music, U.N.A.M.  In 1986, he
developed a composition and improvisation technique called
Micro-Ritmia, which is a powerful tool to develop new music textures.

With Micro-Ritmia, musical parameters like velocity, rhythm and density can now
be taken to a level reserved for computers and mechanical devices; Micro-Ritmia
can construct textures made from 25 chords per second over a period of 10
minutes and has been growing in popularity with many musicians over the years.

His first record using Micro-Ritmia,
Lejos del Pafraiso,
was praised by critics and fellow musicians and has been referred to as
“revolutionary music.” His second record, Mutaciones with Tzadik Records, was produced
by the American composer John Zorn, who published the book Arcana II (2007), “Musicians on Music,” featuring
Martinez’s essay titled: “Micro-Ritmia, Hyperhuman Music.”

Since 1997, Martinez has offered master
classes in México, United States, and Cuba, in which he has performed solos,
worked on duets with Eduardo González, and participated in a quartet ensemble
featuring Mexican percussionists Juan Mercado and Alejandro Huerta.  Micro-Ritmia

Martinez has also invented the
“Zamponophone” (keyboarded pan flutes), the “Altered Guitar” (keyboarded acoustic
guitar featured in his record Mutaciones), and most recently the bass and tenor “Hyperions”
(nylon stringed portable piano), which will be featured in his upcoming album
release.