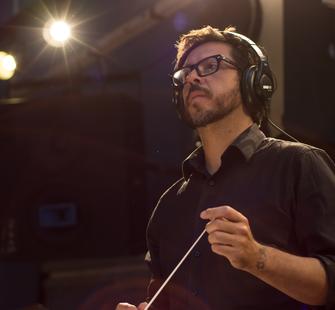 In addition to some long-running
high-profile collaborations (including one with the Kronos Quartet), he has
composed for film, conducted several orchestras, and much more. He has received
several prestigious prizes and awards in Europe, United States and Latin
America, including numerous accolades for his work on the orchestral
arrangement and music direction of the platinum album Rock en tu Idioma Sinfónico. Felipe’s music has been performed and
commissioned by such internationally renowned orchestras and ensembles  as the Czech National Symphony Orchestra, the
Dutch Chamber Choir, the Choir of Madrid, the Cello Octet “Conjunto Iberico,”
the Mexico City Philharmonic Orchestra, and Tambuco Percussion Ensemble, among
many others. His compositions are included in over 10 discographic productions
and in 2010 he became part of the National System of Art Creators in Mexico
where in 2013 he was selected as an honorary member. In 2014 the online tourist
guide MXCity identified Felipe as one
of seven of the most important contemporary Mexican artists (he was the only
musician listed). In 2017 he was selected, alongside two other artists, to
represent Mexico in Johnnie Walker’s global marketing campaign, Keep Walking. Felipe is also the founder
and artistic director of the MalAkh Ensemble, a collective who combine
contemporary music with rock, free jazz, improvisation, folklore, with
electronic music and multimedia.

Felipe has been selected as a SETI Institute Artist in
Residence and is in the early stages of developing a new ambitious live musical
project Earthling, in conjunction
with the SETI Institute.  The work will
involve gathering language and song recordings from around the world through an
open call. Those recordings will be mixed and merged live, with performances by
a wide range of musicians.  Felipe will
be working closely with the Tambuco Percussion Ensemble, an acclaimed quartet
who play a vast and unique collection of percussion instruments.

Felipe’s residency at the Lucas Artists Programs at
Montalvo Arts Center is supported by the Consulate General of Mexico in San
Jose.