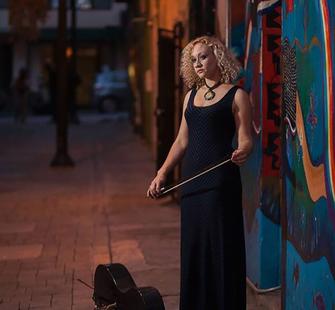 Freya Seeburger, aka Cellista, is an
American cellist and artistic director of the interdisciplinary performing arts
company Juxtapositions.  She is known for
collaborating with artists across various media, as well as self-producing live
performances in unconventional spaces that incorporate elements of classical
music, theater, improvisation and visual art across a range of genres including
pop, hip-hop, classical and more. These performances often feature a carbon
fiber cello and loop station.

Classically-trained, she has studied with members of the Alexander
String Quartet and Kronos Quartet. In 2013 she entered SFSU for her MM. She is
a Nagels scholarship recipient and a Belle Foundation grantee. In 2016, she presented the
“End of Time” at Anno Domini art gallery in San Jose. This dual
exhibit with internationally renowned visual artist Barron Storey received
critical acclaim and was mentioned in Juxtapoz magazine, SJ’s MetroActive and
Silicon Valley Debug.

As an educator her work
parallels her performing life in that it is at the intersection of many
disciplines. She seeks to nourish
process-based classrooms and teach, through music, theater, writing, and the
valuable skills that are associated with the art by interweaving them into the
general curriculum.