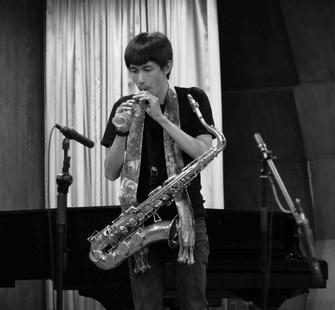 Jay Afrisando is an Indonesian composer, improviser, and multi-instrumentalist. Trained in jazz and improvised music since 2008, he has performed with Jen Shyu (United States), Cedric Hanriot (France), Gamin (South Korea), 숨[su:m] (South Korea), Djaduk Ferianto (Indonesia), the late Slamet Gundono (Indonesia), and Otomo Yoshihide (Japan), to name a few. Some of his compositions have been performed in Amsterdam, Seoul, New York, and New South Wales. Jay has produced two albums with his project, Jay & Gatra Wardaya, in which he composed and performed his style of “poetry music.” In addition to experimenting with improvisation and intercultural musical elements, he also addresses environmental issues through his audio-visual work, “Percakapan dengan Kebisingan” (Conversation with Noise) and his improvised piece, “The Indisposed City.” In 2014, he was awarded an International Fellowship to study traditional Korean music. The following year, he was honored with Second Prize at the Prix Annelie de Man for his work, “Water Siter.”