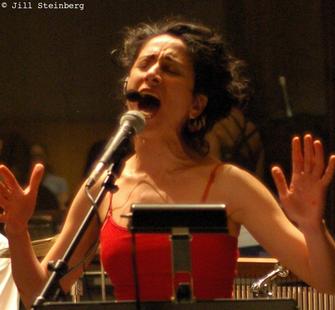 Haleh Abghari is a native of Iran and makes her home in New York City. The New York Times hailed her work in Georges Aperghis’ Recitations for Solo Voice as “a virtuoso and winning performance,” and the Washington Post described her voice as “. . . high, dry, sweet and piercingly pure soprano.” Her portrayal of King George III in Eight Songs for a Mad King by Peter Maxwell Davies with the New York New Music Ensemble was cited as one of the “Performances of 2007” by MusicWeb International.

In addition to working with numerous living composers, Abghari has collaborated on many projects and installation-performance pieces with visual and performance artists. Her awards include a Fulbright Scholar Grant to work on the vocal music of György Kurtág in Budapest. Her major teachers were Phyllis Bryn-Julson, Adrienne Csengery, and Paul Hillier and she pursued her studies in music at The University of California at Davis, Peabody Conservatory, The Mannes College of Music, and the Banff Centre for the Arts in Canada. She works as a music programmer and host for WNYC (NYC’s public radio station.)

2009-10 season activities include: Soloist in Four Settings by Melinda Wagner at the Monadnock Music Festival; Guest soloist with the New York New Music Ensemble in a 75th birthday concert for Mario Davidovsky; an appearance at the San Francisco MOMA with animation artist Martha Colburn; artist-in-residence at the University of California at Davis, premiering a work written for her by Eric Moe; and a concert of music by Georges Aperghis with Bent Frequency in Atlanta.