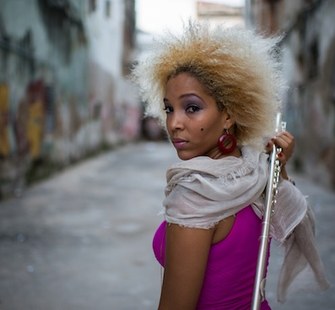 Haydée López Peña is a Havana-based flutist, vocalist and producer. She
attended the renowned Instituto Superior de Arte in Havana, where she studied
flute performance along with music education and music therapy. Upon
graduating, she found her way into Havana’s vibrant jazz scene, becoming an
in-demand session player. Beginning in 2010, she began working with traditional
Cuban ensemble Achy Lang y Afro Cuba, contributing to their acclaimed
Cubadisco-nominated album, Abriendo Caminos (2013). Currently, Haydée is
working on her debut solo album influenced by an array of traditional Cuban
styles including salsa, rumba, and bolero, along with American jazz and soul.
In addition to her recording and ensemble work, she has collaborated with
Orquestra Sublime to present work at public institutions and run workshops with
elderly cha-cha-cha and danzon musicians.