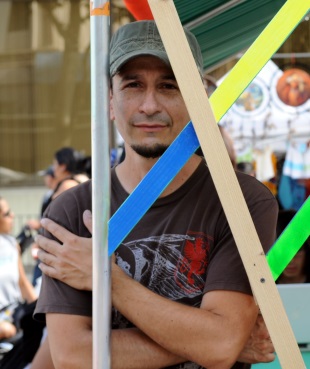 Dio Mendoza was born in Uruapan, Michoacan, México in 1969. As a young
child, Mendoza spent a great deal of time after school playing with his friends
and selling Chiclets in the town’s plaza. At
the age of twelve Mendoza, along with his family, immigrated to the small town
of King City in California. After graduating from High School with honors he
was awarded a scholarship to attend California Polytechnical University where
he studied graphic design. His interest in graphic design led him to study fine
arts at California College of the Arts where he graduated magna cum laude with
a BFA degree. Following his studies he was awarded a six-month residency in
Switzerland. In 2003, Mendoza was one of four artists awarded the highly
competitive Eureka Fellowship by the Fleishhacker Foundation.  The Di Rosa Art Preserve of Napa, The
Swagger Group of New York, and La Corporation Jimenez of Mexico hold Mendoza’s
work in their permanent collections. His work has been exhibited throughout the
United States, Europe, Japan and Mexico.