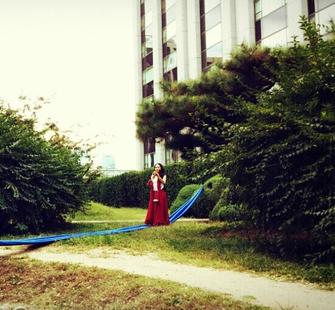 Born
in Illinois, USA, from immigrant parents of Taiwan and East Timor, Jen Shyu is
an experimental jazz vocalist, composer, multi-instrumentalist, dancer,
scholar, and educator, having performed internationally as a solo artist,
bandleader, and collaborator. Also a Stanford University graduate, MacDowell,
Yaddo, and Montalvo Arts Center fellow, she has toured and recorded with
saxophonist Steve Coleman & Five Elements since 2003 and has presented her
own music at Lincoln Center, Brooklyn Academy of Music, Blue Note NYC, Merkin
Hall, Bimhuis (Netherlands), Salihara (Indonesia), National Gugak Center and
the National Theater of Korea, to name a few. Shyu has sung with jazz giant Anthony Braxton in his operas Trillium E and Trillium J (April 2014), and with Dave
Burrell, Chris Potter, and Michael Formanek among many others. She has produced
5 albums as a leader: For Now, Jade Tongue, Inner Chapters, Raging
Waters and Red Sands, and is the first female artist and vocalist
as bandleader on the Pi Recordings label with the widely praised album Synastry
with legendary bassist Mark Dresser.

Having done extensive music
fieldwork and research, especially shedding light on lesser known traditional
musics in danger of disappearing in Taiwan, China, and East Timor, Shyu
recently spent almost two years (2011-2013) on a Fulbright in Indonesia
studying Sindhenan, traditional Javanese improvisational singing,
as well as the simultaneous Javanese song and dance form rarely performed
because of its difficulty, Ledhekan.  She was invited to
perform Ledhekan at the Mangkunegaran Palace, the center of her
Javanese dance studies, as well as the sacred dance Srimpi Pandelori  in the
Kraton palace of Yogyakarta, as taught by Bu Sutiyah, leader of Pujokusuman
dance school.  She also has performed
her own music at numerous festivals throughout Indonesia both solo and in
collaboration with Javanese artists such as Djaduk Ferianto, Eko Supriyanto,
the late Ki Slamet Gundono, Mugiono Kasido, Suprapto Suryodarmo, and Peni Candra Rini.  She then received a
six-month scholarship from the National Gugak Center and the Cultural
Partnership Initiative of the Korean government to study Pansori, Gayageum
Byeongchang, and Korean language in Seoul.  Also an Asian Cultural Council
and Jerome Foundation grantee, she is currently composing a solo opera called Solo Rites: Seven Breaths inspired by
her fieldwork in Cuba, Brazil, Taiwan, China, East Timor, Indonesia, and Korea
over the past 10 years, directed by renowned Indonesian filmmaker-director
Garin Nugroho and to be premiered on May 28, 2014 at Roulette in NYC.

Ben Ratliff of the New York Times,
on her singularity:  “I
suppose there have been other people like Jen Shyu: disciplined vocalists who
speak and sing in multiple languages, work with improvisation and composition
and movement, feel at home both with quick-change rhythmic patterns and
meditative long tones, use narrative poetry as a basis for songs, and use a
two-stringed Taiwanese moon lute in a New Yorkish and vanguardish jazz context.
I just can’t think of any right now.
Instead of thinking about her categorically, you can focus on how
beautifully and generously she uses sound.”