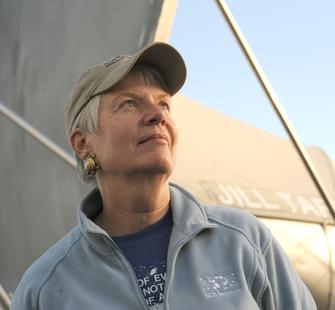 Jill Tarter holds the Bernard M. Oliver Chair for SETI Research
at the SETI Institute in Mountain View, California. Tarter received her
Bachelor of Engineering Physics Degree with Distinction from Cornell University
and her Master’s Degree and a Ph.D. in Astronomy from the University of
California, Berkeley. She served as Project Scientist for NASA’s SETI program,
the High Resolution Microwave Survey, and has conducted numerous observational
programs at radio observatories worldwide. She is a Fellow of the AAAS and the
California Academy of Sciences, she was named one of the Time 100 in 2004, and
one of the Time 25 in Space in 2012, received a TED prize in
2009, public service awards from NASA, multiple awards for communicating
science to the public, and has been honored as a woman in technology. Since the
termination of funding for NASA’s SETI program in 1993, she has served in a
leadership role to design and build the Allen Telescope Array and to secure
private funding to continue the exploratory science of SETI. Many people are
now familiar with her work as portrayed by Jodie Foster in the movie Contact.